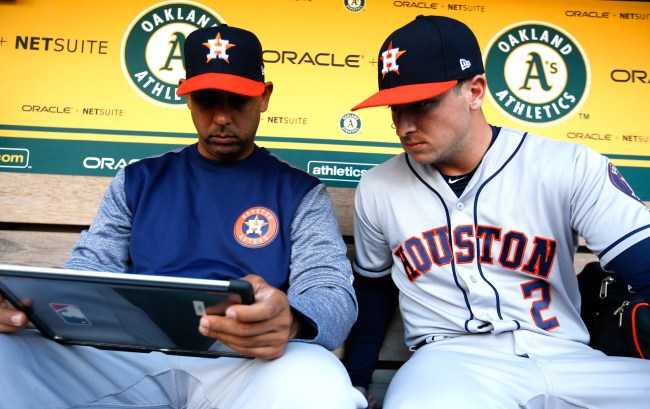 The Major League Baseball investigation to determine the extent of the alleged illicit sign-stealing by the Houston Astros just got a little bigger.

The investigation, spurred by this week’s bombshell report by The Athletic, will now reportedly extend to the Boston Red Sox.

In The Athletic report, former Astros pitcher Mike Fiers along with three other people in the Astros’ organization, claimed the team used a camera positioned in the outfield of Minute Maid Park to steal signs in 2017 in real time, including during the team’s run to the 2017 World Series championship.

Several other players, including opposing pitchers Danny Farquhar, Trevor Bauer, and Carson Smith, have also come out and accused the Astros of cheating while they were on the mound in Minute Maid Park.

Numerous videos have since gone viral on the internet purportedly backing up claims that the Astros communicated with batters by making a banging sound in the dugout to signify an off-pitch was about to be thrown.

A look at the home and away splits of several key Astros players during the 2017 postseason also appears to reinforce suspicion.

Video from 2019 appears to show that the Astros were still using this method of signalling off-speed pitchers as recently as the 2019 season.

Jomboy provided great evidence the Astros were, in fact, cheating in 2017.

Here’s some evidence the Astros were, in fact, STILL cheating in 2019.

During the 2019 American League Championship Series, the New York Yankees accused the Astros of sign-stealing and complained to the league about whistling from the Astros’ dugout during Game 1.

“They’ve been doing it for years,” said an executive from another team told SNY.

The cheating accusations have not been limited to just Astros hitters, however. Trevor Bauer also hinted in 2018 that Astros pitchers (and pitchers from other teams) were using substances to increase spin rate on their pitches giving them a competitive advantage.

His accusations were not completely unfounded as starting pitchers Dallas Keuchel, Charlie Morton, Gerrit Cole, and Justin Verlander all became almost unhittable (or even more unhittable) after they joined the Astros.

Verlander, who won his second Cy Young Award on Thursday at age 36 (Kate Upton can rest easy this year), and has been very vocal in the past about what he views as injustices and cheating in baseball has been conspicuously silent on the matter.

Now, according to ESPN’s Jeff Passan, the Boston Red Sox organization is being dragged into the Astros’ sign-stealing investigation.

The initial stages of the investigation already have begun, sources said, with league personnel contacting people from both the Astros and Boston Red Sox organizations Wednesday. The league is attempting to cull tangible evidence from the widespread paranoia of front offices and teams around the game about others cheating and has indicated it will consider levying long suspensions against interviewees who are found to have lied, sources said.

Among those in the Red Sox organization said to be on MLB’s interview list include the team’s manager Alex Cora, the Astros’ former bench coach, as well as former Astros bullpen coach Craig Bjornson who is now with the Red Sox.

MLB will also reportedly be interviewing new New York Mets manager Carlos Beltran, who was on the team in 2017 and denies any knowledge of cheating (his postseason stats back him up), as well as Astros manager A.J. Hinch and recently fired Astros assistant general manager Brandon Taubman.

Major League Baseball will need approval of the Players Association, something they received when they investigated the Red Sox in 2017 for the illegal use of an Apple Watch, to interview players about the allegations.