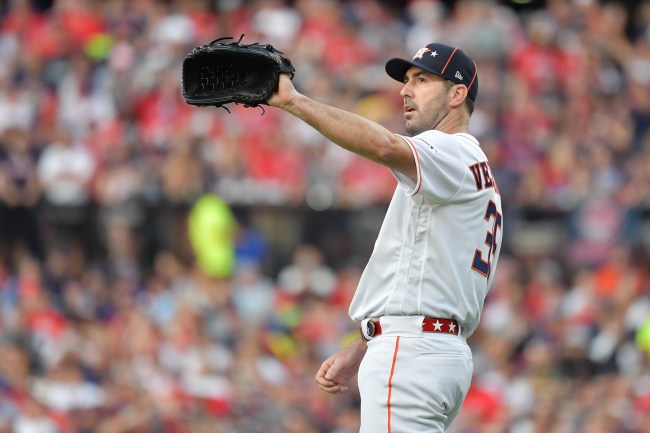 Imagine you’re a top 10 paid employee in, say, a sales role. You’re performing well this year by closing a bunch of little deals, but the big deals that have buttered your bread in the past are eluding you. Instead of looking within, you decide to blame this underachievement on the product you’re selling in a company-wide call that leaks to potential clients. The same product you’ve been selling year-after-year. Any one of us would be fucked.

Justin Verlander should be no different after going on rant publicly claiming that the league and MLB commissioner Rob Manfred are to blame for the record-breaking offensive production in the MLB this season.

The 36-year-old, who has allowed a major league-high 26 home runs this season, claimed that the MLB is turning the league into a “fucking joke” by juicing the baseballs to maximize dingers. He also called out Manfred for denying it, even though the commissioner has acknowledged that this year the baseballs have had “less drag,” attributing it to the variations of a man-made product.

Verlander’s claim did not sit well with former teammate Max Scherzer, who said plainly: “You gotta go out there and pitch. I’m not gonna cry about it. Our hitters get to hit with it.”

It has since been reported by Jayson Stark of The Athletic that Verlander received a stern talking to from MLB’s chief baseball officer Joe Torre, United States national baseball team manager Jim Leyland and at least one other MLB official.

Houston Astros starting pitcher Gerritt Cole said after Tuesday night’s All-Star Game that he told Verlander that the top brass were foaming at the mouths to speak with him.

“I may actually have facilitated that meeting,” Cole said. “I saw Jim and Joe were in (manager Alex Cora’s) office. And they said hi. Then Jim, in not a profanity-laden way, said, ‘Get Justin in here right now.’ So I came out and said, ‘Hey, Skip wants to see you.’ And he said, ‘OK.’ Then he comes back and he goes, ‘Man, I just got chewed out.’”

Stark reports that the executives, in more than one word, told Verlander that he doesn’t know what the hell he’s talking about.

They may have even brought up the fact that it’s not their fault that Verlander has allowed a major league-high 26 home runs this season, just four shy of the number of round trippers he’s allowed in a single season his entire career.