A.J. Hinch Revealed Why Gerrit Cole Didn’t Pitch In Game 7 Of The World Series And It Makes Absolutely No Sense 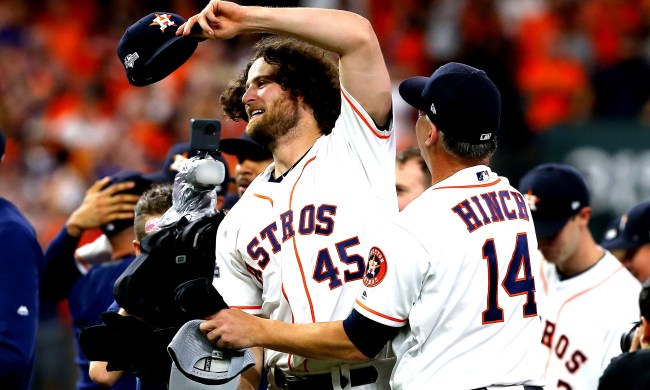 Following their Game 7 loss in the World Series, Astros manager A.J. Hinch was the target of much ire after not letting his ace Gerrit Cole pitch, even after having having him warm up in the bullpen.

Speaking to the media after the loss, Hinch was asked about the non-move involving Cole and responded with a terrible explanation for why he didn’t let his ace pitch.

“We saw Gerrit up and tossing a couple times in the bullpen was he available tonight?” Hinch was asked.

“Obviously. Yeah, he’s not throwing a bullpen,” the manager replied.

“Well, I guess, what made you go with the guys you went with us opposed to him?” the reported followed up.

“I wasn’t gonna pitch him unless we we were gonna win the World Series and have a lead,” explained Hinch. “I mean, he was gonna help us win. I didn’t want him… he he was available and I felt it was a game that he was going to come in had we tied it or taken the lead. He was going to close the game in the ninth after I brought Osuna in.”

Wow. He should be fired for even admitting that was his logic in not letting Cole pitch in Game 7. The Astros WERE winning when he pulled Greinke.

Hinch was also asked about taking starter Zach Greinke out after giving up just his second hit in 6-1/3 innings.

“Do you leave Zach in if he had gotten Soto out instead of walked him?” the reporter asked.

“I don’t know. I mean. I don’t know,” replied Hinch. “I didn’t leave him in. I’m not I’m not sure what I would have done there’s no real ifs and what-ifs and things like that.”

There are a few thousand Astros fans who would certainly beg to differ.

Just like there are 29 other managers who would have let Greinke finish the 7th, then slammed the door with their CY Young winner for the last six outs.

Shoutout to AJ Hinch for preserving Gerrit Cole’s arm for the #Yankees.