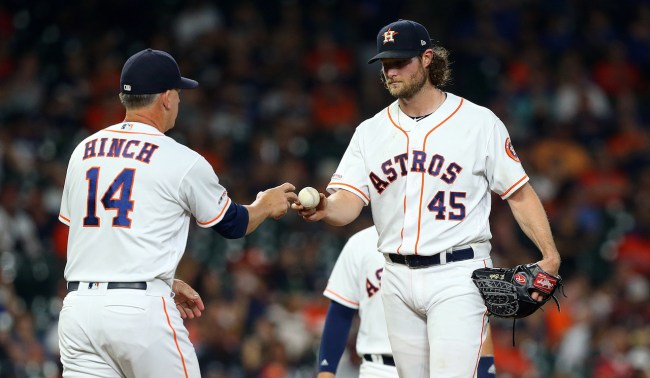 If you had told Houston Astros fans that they would take a 2-0 lead into the 7th inning of Game 7 on the back of a Zack Greinke gem and with staff ace Gerrit Cole locked and loaded in the bullpen, they would have signed up for that before you could even finish your sentence.

And lo and behold, that’s the exact scenario that the 2017 World Series champions found themselves in last night.

Heading into the 7th inning, the Astros found themselves with a two-run lead after former Cy Young-winning pitcher Zack Greinke dominated the Nationals, limiting them to just two hits. But instead of letting Greinke’s hot hand ride, Astros manager AJ Hinch pulled the All-Star pitcher in favor of… reliever Will Harris.

That’s right, not Gerrit Cole — who was one of the best pitchers in the league this season and was previously warming up in the bullpen — but Will Harris, who subsequently gave up a two-run home run to Howie Kendrick that gave the Nats a 3-2 lead.

As we now know, the Nationals wouldn’t look back from there, tacking on an additional run in the eighth inning and two more runs in the ninth inning, ultimately winning by a score of 6-2 to win their first-ever World Series championships.

Needless to say, baseball fans were left scratching their heads trying to figure out Hinch’s use of his bullpen, especially when it came to impending free agent Gerrit Cole.

AJ Hinch notched the heck out of this game all because he didn’t want to bring his best arm on the whole staff in in the middle of an inning. Overthinking it has led to the wheels falling off.

As someone who covers the next team that Gerrit Cole is going to pitch for, I'm definitely a fan of the Astros saving his arm. Kudos for doing the right thing.

Gerrit Cole to A.J. Hinch following the game after not being used in Game 7 pic.twitter.com/qurLEOYOa1

Perhaps Gerrit Cole just didn't feel that good when he warmed up or the bullpen coach didn't like what he saw.

Last night may have been Hinch’s last opportunity to utilize Cole, too, as the 29-year-old All-Star is expected to test the free agent market this offseason.