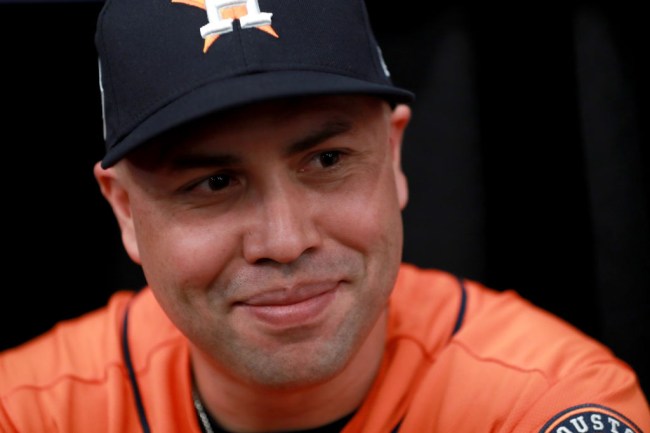 On Tuesday, The Athletic dropped a bombshell report in which multiple people who were formerly employed by the Houston Astros came forward to allege the team used a camera to steal signs in real time during the 2017 season on their way to winning the World Series.

The employees in question claim the team harnessed a live video feed and then used a drum to let players know when an off-speed pitch or breaking ball was coming and the accusations seem to be supported by video evidence that made the rounds after the article came out.

It’s not exactly a secret that teams around the sporting world will do whatever they can to gain a competitive advantage, and while stealing signs isn’t technically against the rules, it’s pretty obvious the Astros crossed a line here, and after the news surfaced, Houston announced it would be cooperating with the MLB to launch an investigation into the matter.

After the allegations surfaced, Carlos Beltran—who played for the Astros during their World Series run—spoke with The New York Post, and while he admitted the team had a tendency to steal signs when they had a runner on second, he denied a camera was used in order to relay information to batters.

“I’m not aware of that camera. We were studying the opposite team every day.

We took a lot of pride studying pitchers [on] the computer. That is the only technology that I use and understand. It was fun seeing guys get to the ballpark to look for little details.

The game of baseball for years, guys have given location and if the catchers get lazy and the pitcher doesn’t cover the signs from second base [then] of course players are going to take advantage.

I don’t call that cheating. I call that using small details to take advantage. I think baseball is doing a great job adding new technology to make sure the game is even for both teams. It’s easy to blame someone when they win.”

Of course, it’s Beltran’s word against that of four people who don’t really seem to have any reason to lie so I guess we’ll see who’s telling the truth once the MLB gets to the bottom of things.