In Light Of Sign-Stealing Allegations, The Astros’ Home And Road Batting Splits From The 2017 Postseason Are Stunningly Lopsided 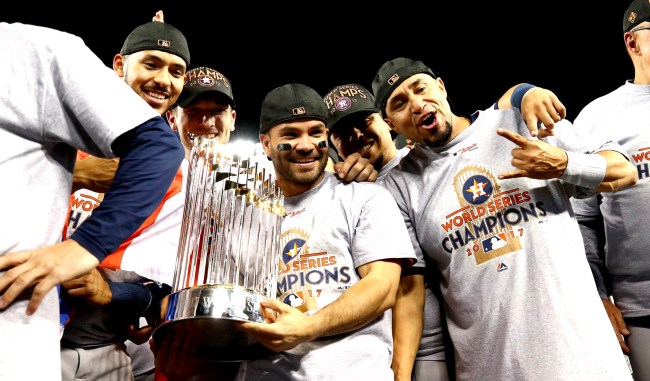 Now with the Houston Astros having been accused of stealing signs during the 2017 season by former members of the organization, including pitcher Mike Fiers, the team’s home and road postseason batting splits in their run to a World Series victory are even more startling.

During the 2017 Major League Baseball postseason, the Astros played 18 games – 9 on the road and 9 at home in Minute Maid Park, the place where Houston has been accused by over a half-dozen people, including opposing pitchers Danny Farquhar, Trevor Bauer and Carson Smith, of cheating while they were batting.

The splits are equally as striking when taking a look at some individual Astros’ players’ home and road splits in the 2017 postseason.

Interestingly, one of the players who claims to have known nothing about any sign-stealing is Carlos Beltran.

He actually hit worse at home, do perhaps it was only a select group of Astros players who decided to participate in the alleged cheating.

While these stats don’t prove anything, they certainly don’t help the Astros’ claims of innocence.

Neither does this new video analysis posted to Twitter on Wednesday showing another example of what appears to be the Astros making a banging sound in the dugout when an offspeed pitch is about to be thrown. This time in 2019.

Jomboy provided great evidence the Astros were, in fact, cheating in 2017.

Here’s some evidence the Astros were, in fact, STILL cheating in 2019.

Nor does this video… (Watch catcher Travis d’Arnaud desperately try to hide the sign… with no one on base.)

haha listen to this one. Springer homers on an 0-2 pitch pic.twitter.com/FZ6eT6Ikwf