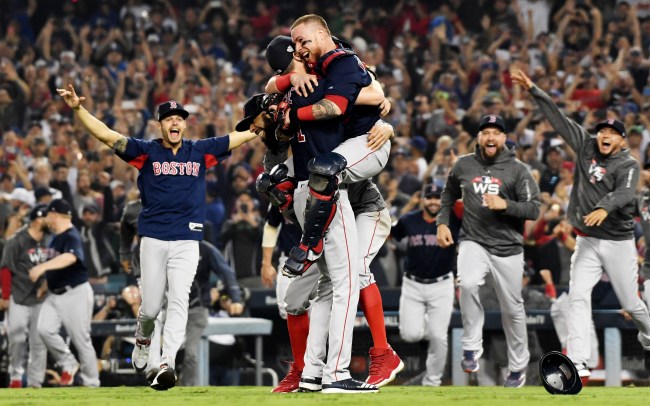 The Major League Baseball investigation into the sign-stealing accusations involving the Houston Astros is reportedly close to reaching a conclusion with punishment expected to be handed down soon.

However, the scandal is far from over as the investigation into the 2018 Boston Red Sox which had previously been alluded to in November of 2019, may just be getting revved up, according to Ken Rosenthal and Evan Drellich of The Athletic.

Back in November, ESPN’s Jeff Passan reported that the Boston Red Sox organization was being pulled into the Astros’ sign-stealing investigation.

The initial stages of the investigation already have begun, sources said, with league personnel contacting people from both the Astros and Boston Red Sox organizations Wednesday. The league is attempting to cull tangible evidence from the widespread paranoia of front offices and teams around the game about others cheating and has indicated it will consider levying long suspensions against interviewees who are found to have lied, sources said.

Now the focus appears to be on the Red Sox use of the video replay room located near the dugout which is intended to be used for managers to review plays and assist them in deciding whether or not to challenge umpires’ calls.

Three people who were with the Red Sox during their 108-win 2018 season told The Athletic that during that regular season, at least some players visited the video replay room during games to learn the sign sequence opponents were using. The replay room is just steps from the home dugout at Fenway Park, through the same doors that lead to the batting cage. Every team’s replay staff travels to road games, making the system viable in other parks as well.

“It’s cheating,” one person who was with the Red Sox in 2018 told The Athletic. “Because if you’re using a camera to zoom in on the crotch of the catcher, to break down the sign system, and then take that information and give it out to the runner, then he doesn’t have to steal it.”

• A Red Sox staff member in the video replay room would tell a player the sign sequence, then the player would go back to the dugout and share the message.

• Someone in the dugout would then communicate with a baserunner who could watch the catcher’s signs and signal to the hitter what pitch was being thrown.

In daily hitters’ meetings, Red Sox players and personnel would review their communication methods for that day.

The runner would let the hitter know if he was aware of the sequence. “Put two feet on the bag or look out into center field, and do something that’s subtle,” as one Red Sox source described it.

The runner stepping off the bag with the right foot first could mean fastball; left foot first, a breaking ball or off-speed pitch.

Such a system was far more difficult for opponents to detect than banging on a trash can.

One player also told The Athletic that he and others used the video replay room while he was with the Yankees as far back as 2015.

To be clear, MLB is not investigating or aware of any allegations against the Yankees for sign stealing in 2018 or 2019, as they are with Red Sox.

MLB began monitoring video replay rooms to ensure no cheating was going on in 2019, but according to one person with the Red Sox, “We had (the monitors) in our back pocket. If we wanted to whisper something or they walked out, then we could do something if we needed to.”

The Red Sox were previously fined in 2017 for using their video replay room to steal signs and communicate with an athletic trainer in the dugout utilizing an Apple watch.

Red Sox manager Alex Cora was a bench coach for the Astros and reportedly played a important role in creating the Astros’ alleged sign-stealing system used in 2017, according to The Athletic. Craig Bjornson, also now with the Red Sox, is the former Astros bullpen coach.

The Boston Red Sox, however, did issue a statement.

Statement from the Boston Red Sox: “We were recently made aware of allegations suggesting the inappropriate use of our video replay room. We take these allegations seriously and will fully cooperate with MLB as they investigate the matter.”

If both teams are found guilty of illegally using electronic devices to steal opposing teams’ signs, it would mean that both the 2017 as well as the 2018 World Series winners cheated their way to championships.