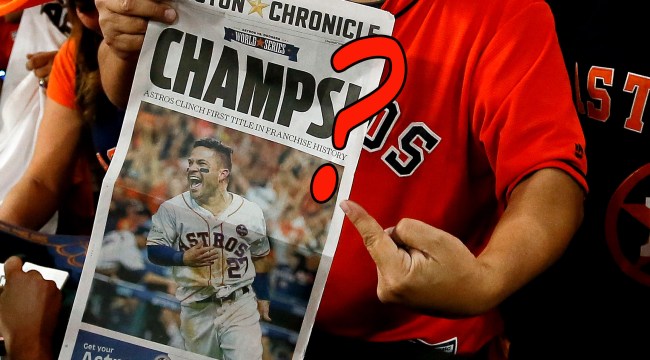 A decision by MLB on the discipline that will be handed down on the Houston Astros’ for sign-stealing is expected to come down soon, reports Jeff Passan of ESPN.

The lengths that the Astros allegedly went to in an effort to steal their opponents’ signs is far beyond anything ever seen in the world of sports and the discipline for their actions is expected to be “harash.”

This whole saga began back in November with a report by The Athletic in which four people formerly associated with the Astros, including pitcher Mike Fiers, claimed the team used a camera in center field of Minute Maid Park to steal signs electronically in 2017.

That report then led to other players, executives and scouts leveling even more accusations, including speculation and claims about the various ways the Astros relayed the stolen signs using computers, video equipment, auditory and visual cues, and other electronic tools, including possibly even using electronic buzzing bandages.

In an email acquired by The Athletic, Astros executive reportedly asked scouts for help with stealing signs, possibly using cameras in 2017.

MLB Commissioner Rob Manfred suggested following the revelations that the Astros could be hit with an unprecedented punishment for stealing signs.

Now, according to Passan, “Major League Baseball’s investigation into the Houston Astros’ illegal use of technology is in its final stages.”

Discipline against the Houston Astros for using technology to cheat is likely to come within the next two weeks, sources familiar with the situation tell ESPN, and those in the crosshairs expect it to be harsh. Long suspensions are likely. News at ESPN: https://t.co/wYSUhGSdvB

The targets for discipline will be employees of the team, including the front office and on-field coaching personnel, but will not include the players involved in the scheme, according to three players who have been interviewed. Those who could face discipline include Astros general manager Jeff Luhnow, Astros manager AJ Hinch and other front-office members, sources said. The team also could face a record fine.

The silence from Astros players including the previously very outspoken Justin Verlander, who won his second Cy Young Award at the age of 36 in 2019, and has more than once publicly complained about keeping the playing field equal in MLB, has been very noticeable these past two months.

However, current Pirate Joe Musgrove who pitched for the Astros in 2017, recently shared his take on the scandal in the form of one of the weakest explanations ever offered for cheating.

“Everyone always accuses people of something. That stuff goes around the league all the time. Everyone is trying to get an advantage somewhere. But that doesn’t affect me at all, I don’t think that taints [the championship season],” said Musgrove. “Everyone hears that we cheated and they hear that there was the whole trash can deal going on, but no one sees the work that we were putting in every day to prepare ourselves and give ourselves an advantage.”

Pirates pitcher Joe Musgrove was w/the 2017 Astros,hasn’t been contacted by MLB,didn’t c the rules violations that were alleged:“Everyone always accuses people of something-Everyone heard how we cheated-but no one sees the work we put in every day..to give ourselves an advantage” pic.twitter.com/rpUGi8e4BR

It sounds like he’s saying everyone else is cheating, but they worked harder at it so give them some credit, but that can’t possibly be what he means, right?