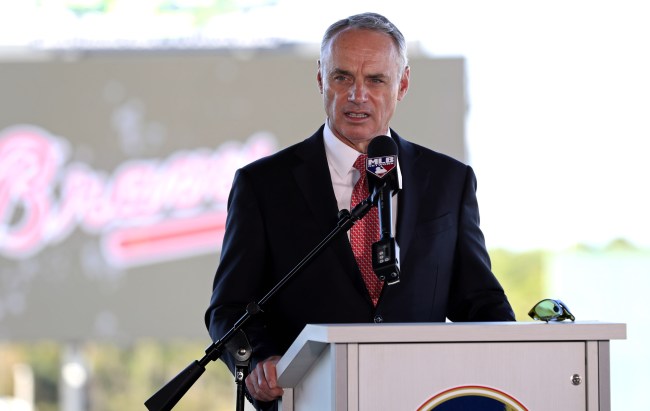 MLB Commissioner Rob Manfred held a press conference at CoolToday Park in North Port, Florida on Monday and somehow managed to dig the massive hole he’s in even deeper.

After calling the World Series trophy “a piece of metal” in trying to defend his decision to not punish a single Hosuton Astros player for cheating their way to a championship in 2017 (and perhaps making another World Series in 2019), Manfred spoke to the media at the Grapefruit League and attempted to walk back his comment.

Jon Lester, a three-time World Series champion, on the “piece of metal” comment from the Commissioner in reference to the idea of taking the 2017 trophy/title from Astros… pic.twitter.com/5ieWa1IuZf

“I have to say I made one mistake, at least, during that long day. And that was, in an effort to make a rhetorical point, I referred to the World Series trophy in a disrespectful way. And I want to apologize for that. There’s no excuse for it. I made a mistake. I was trying to make a point, but I should have made it in a more effective way. And again, I want to apologize for it,” Manfred admitted.

Then he blamed society when comparing the 1919 Black Sox scandal to the Astros’ cheating. Seriously. He did that.

“I think that part of it is the way society has evolved,” said Manfred. “It’s a very different world than 1919. But I think more fundamentally, this activity relates to the play of the game on the field in a way that is tangible for our fans and has touched a cord of unfairness with our players that has made it a very big story. And it is a big story, we understand that, we understand it’s a serious issue, and we’re really committed to doing everything we can to restore faith in the integrity of the play of the game on the field.”

Manfred is so far in over his head with this deal that even the usually boring Mike Trout has called him out publicly. Heck, LeBron James, who plays basketball, has gone after him for being incompetent.

The commissioner’s big talking point has been that MLB would have lost any dispute with the MLB Players’ Association if he had tried to punish any of the Astros. The fans, and many players, rebuttal to that has been a cry of “At least you could have tried!”

Had he done that, and lost, at least he could point to fact that he attempted to punish those involved, not let them off scot-free.

And now there’s this… the MLBPA says he lied about having to give the players’ immunity from punishment.

Them walls closing in Manfred. Honestly starting to sound like he had a hand in this bullshit cheating scandal pic.twitter.com/WnVAcMNX16

Something else that should definitely not get lost in all this nonsense is the fact that Carlos Correa claimed the Astros won the 2017 World Series “fair and square” because they didn’t cheat in the series.

“We earned that championship,” said Correa.

Meanwhile, Manfred stepped all over Correa’s claim when he pointed out during the presser that the Astros used their sign-stealing scheme throughout the 2017 postseason.

Astros players have insisted they weren’t using the trash can in the 2017 playoffs. Manfred says there was evidence that they were. What was that evidence? “Statements from players.”

Rob Manfred really just had the audacity to say, “I made ONE mistake.” GTFO with that. This clown needs to resign, effective immediately. pic.twitter.com/0Ybm3e6Z6S

I wrote a month ago that I was not in favor of MLB stripping the Astros of their title. I was open minded to Correa saying they didn’t use trash cans in World Series. After hearing Manfred say they absolutely did use it in the playoffs, I’ve changed my mind. Strip the title now.

He should not be MLB’s Commissioner any longer

It’s never been more clear: Major League Baseball needs a new commissioner. Rob Manfred has demonstrated the job is too much for him to handle. @MLB

Rob Manfred is the best thing to ever happen to Roger Goodell.