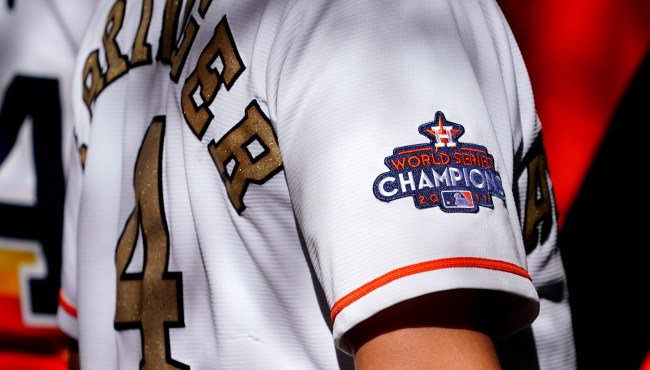 MLB Commissioner Rob Manfred contined Major League Baseball’s “Make Things Worse Tour” over the weekend when he sat down for a lengthy interview with ESPN’s Karl Ravech to discuss the investigation of the Houston Astros and eventual punishment, or lack thereof, for the electronic sign-stealing scandal.

During the 45 minute interview, Manfred basically passed the buck to Astros owner Jim Crane and the fans to dole out a proper punishment for cheating. Wait, isn’t that his job?

Oh, right. Manfred explained that on Sunday too when asked why the players weren’t disciplined… at all.

So rather than actually make a statement, punish those responsible and then take the fight to them, he chose the coward’s path of least resistance. Got it.

Rob Manfred and Roger Goodell dueling to decide who the worse commissioner is: pic.twitter.com/3VEcTIMVTQ

As for why Manfred didn’t strip the Astros of their 2017 World Series title, it’s really not that important, he says.

“It has never happened in baseball. I am a believer in the idea that precedent happens and when you deviate from that, you have to have a very good reason. The report gave people a transparent account of what went on. We put people in position to make their own judgments about the behavior that went on. That certainly has happened over the last month. The idea of an asterisk or asking for a piece of metal back seems like a futile act,” Manfred told Ravech. “People will always know that something was different about the 2017 season, and whether we made that decision right or wrong, we undertook a thorough investigation, and had the intestinal fortitude to share the results of that investigation, even when those results were not very pretty.”

“A piece of metal…” Your Major League Baseball commissioner, ladies and gentlemen!

Manfred calling the World Series trophy just a piece of metal is really going to go over well with all of the MLB players who work their asses off playing 162 regular season games for a chance at the title.

Also, Manfred really needs to look up the definition of “intestinal fortitude” because he once again showed none when explaining why no players in the “player-driven” (his words) sign-stealing scheme.

“Yeah, I understand. I understand people’s desire to have the players pay a price for what went on here,” said Manfred. “I think if you watch the players, watch their faces when they have to deal with this issue publicly, they have paid a price. To think they’re skipping down the road into spring training, happy, that’s just a mischaracterization of where we are. Having said that, the desire to have actual discipline imposed on them, I understand it and in a perfect world it would have happened. We ended up where we ended up in pursuit of really, I think, the most important goal of getting the facts and getting them out there for people to know it.”

That’s right. The Astros players who cheated their way to a World Series ring are going to have their feelings hurt a lot this year. Isn’t that punishment enough, people?

Manfred's insistence that the public shame is the real punishment here is an absolute joke. You are the commissioner. It's your job to punish the players. None of the current Astros players feel any remorse.

Manfred added during the interview, “I think the owner has the ultimate responsibility for what goes on in his franchise. I mean, that goes back to the way we govern the game, right, I mean that the owner has that obligation. I think in this particular case, I was prepared, based on what the facts showed, to discipline an owner if I felt that was appropriate. I think when you discipline, you have to always rely on the evidence.”

He also stated on Sunday that the league’s investigation of the 2018 World Series champion Boston Red Sox should be completed this week or next.

“We have done everything we could possibly do to get the facts right,” said Manfred.

That really seems hard to believe.