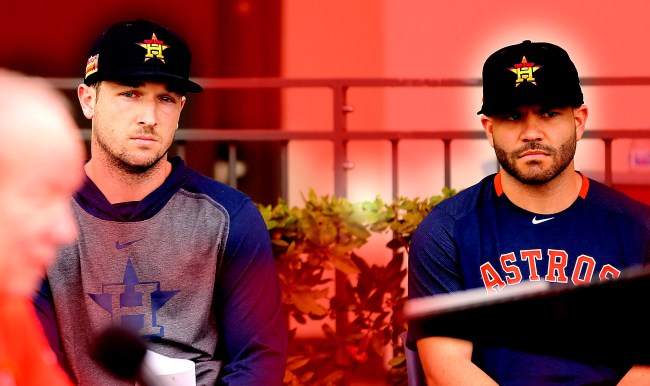 If you happen to have missed the Houston Astros “apology” press conference featuring Alex Bregman, Jose Altuve, owner Jim Crane, and new manager Dusty Baker, whoa boy, did you miss a complete disaster. Fair warning though. If you decide to watch it, and you are a baseball fan with even a smidge of integrity, it will make you angry.

Because you don’t have to be a Major League Baseball player to be royally ticked off at the way the Houston Astros, not only for cheating their way to a World Series title, but for the smug, non-remorseful, up yours attitude the team, from the owner on down, have reacted to being called out for it.

However, if you do happen to be a Major League Baseball player who doesn’t agree with what the Astros did, besmirching the game you play and even negatively affecting the livelihood of players who are just hanging on, like say, Los Angeles Angels pitcher Andrew Heaney, then you are certainly going to be angry as hell.

Which Heaney most certainly is, based on the scathing comments he made on Wednesday about Astros players to Fabian Ardaya of The Athletic.

“I’m not going to make excuses for those guys. I know how it is. You get caught up in something. I’m sure they look back now and say, ‘Oh fuck, we really took that overboard.’ But I think somebody in that locker room had to have enough insight to say this is not OK. I haven’t read all the latest shit to know what everybody’s writing about. I don’t know how much is true. But somebody in that locker room had to say, ‘This is fucked up. We shouldn’t be doing this.’ For nobody to stand up and nobody to say ‘we’re cheating other players,’ that sucks. That’s a shitty feeling for everybody. I hope they feel like shit.”

Heaney also foretold exactly what was going to happen Thursday morning when the Astros players and management issued their formal “apologies.”

Related: New Catalog Featuring Astros’ Alex Bregman Is Getting Destroyed For The Ironic Slogan On The Cover

Reaction to the Astros’ apologies by fans and players has almost universally been negative so one has to wonder… what is the over/under on number of time Astros batters get pitches directed at their earholes this year once games begin?

I take it that the Angels aren’t happy with the Astros’ apology this morning. https://t.co/9nu1Ci277H

Let’s say someone messes up. Messes up bigly, even. And the truth is that they really don’t care about messing up. At all. In fact, they would do it all over again, and you know this. Asking for a friend, would you rather receive:

“After listening to this interview with AJ Hinch, the former manager of the Astros, I couldn’t help but wonder why when asked about whether the team used buzzers this past season that he didn’t answer with a clear cut “no”. Instead he mentioned that Major League Baseball did an investigation and found nothing. I believe the MLB needs to further the investigation into the buzzers. Every player I’ve talked to believes they were using them, not to mention all the reports that have come out on it. In the interview, Hinch said he hit the monitors with a bat in two separate situations indicating he wasn’t okay with it, but never had a team meeting about it and never told the guys to stop when he heard the banging in the dugout of the relaying of signs. Doesn’t sound like someone that was wanting this to stop as he was benefiting in a major way while players jobs were being derailed and families lives affected. One year seems like a nice bargain if you ask me.”