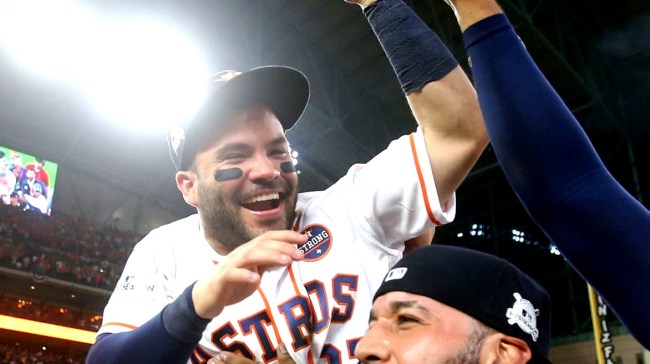 Despite Houston Astros owner Jim Crane stating that the players on his team would be apologizing for the sign-stealing scandal that has rocked Major League Baseball when they report to spring training, there were those (myself included) who figured there was no way the MLBPA was ever going to let that happen.

After all, Major League Baseball was already so scared of the MLBPA that they reportedly gave all the Astros players who testified immunity from punishment because they “didn’t know they were in the wrong” thanks to the Astros front office conveniently failed to pass on Commissioner Rob Manfred’s 2017 sign-stealing memo to their players.

As expected, the spin is already being spun with regard to Astros players and whether ot not they will be apologizing.

Agent Scott Boras, on Wednesday, told The Athletic writer Ken Rosenthal that he doesn’t believe the players should apologize.

“I’m doing what my organization is telling me to do,” Boras said on Wednesday, describing the hypothetical mindset of a player. “You installed this. You put this in front of us. Coaches and managers encourage you to use the information. It is not coming from the player individually. It is coming from the team. In my stadium. Installed. With authority.”

The analogy Boras used was the speed limit.

A man driving 55 mph in a 35-mph zone only believes he is speeding if the limit is clearly posted. Likewise, Boras said Astros’ players who committed infractions only should apologize if they were properly informed of their boundaries.

Here we go. That type of analogy has already been dismissed as nonsensical.

“Players were not given the latest state of the rules,” said Boras, who represents Jose Altuve, Lance McCullers and Aaron Sanchez on the Astros. “To suggest players violated rules that were withheld from them is a false incrimination of players.”

But wait… it gets even better. This line, written by Manfred when addressed the Astros illegal sign-stealing is the crux of the players’ (and their agents) entire argument.

Despite claiming that the sign-stealing was “player-driven,” Manfred wrote, “Luhnow did not forward the memoranda and did not confirm that the players and field staff were in compliance with MLB rules and the memoranda. Had Luhnow taken those steps in September 2017, it is clear to me that the Astros would have ceased.”

“Why would a player think that the organization is setting up a system that is violating MLB rules?” Boras added. “That’s the first question every fan should ask?”

Boras also compared the Astros’ illegal sign-stealing to PEDs. As long is it isn’t known to be against the rules, it’s all good!

“The minute we legislated a compendium of specificity, players were on notice,” said Boras about the comparison. “And then the accountability went directly to them. And it should.”

“Players need to apologize for what they had notice of,” he continued.

(You really need to read this whole thing. It’s astonishing in its complete lack of sense and awareness.)

Somehow Boras has managed to make a very bad situation even worse for the Astros players.

Scott Boras' logic would make a lot of sense if it wasn't the Astros players who masterminded the entire scheme. https://t.co/MmFHzEXjDj

I guess Boras is right, the players are brainless and can’t think for themselves. They were too dumb to know they were breaking the rules.

Absolute garbage. These weren't little kids unsupervised by adults on the schoolyard. They knew they were cheating and went along with it - and benefitted - anyway.

This is such a ridiculous take by Boras. Even if the players somehow "didn't know" they were doing something wrong, the fact is that they were. These players should show some remorse that they damaged the integrity of the game, whether they knew it or not #MLB #AstrosCheat