Wondering Why Astros Players Weren’t Punished By MLB? They Reportedly ‘Didn’t Know They Were In The Wrong’ 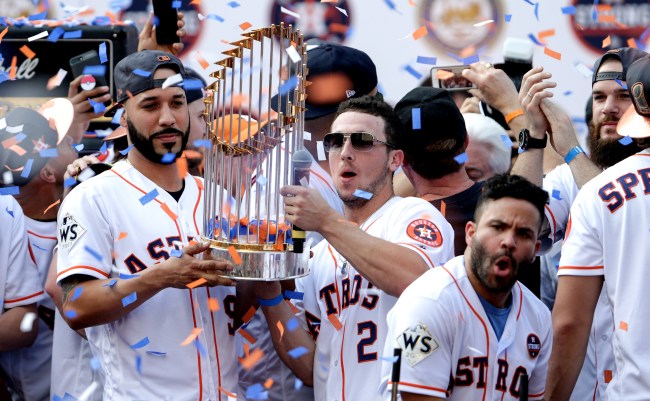 Many people, including several players, were not satisfied with the punishment handed down to the Houston Astros franchise by Major League Baseball.

Most of them felt that MLB suspending Astros general manager Jeff Luhnow and manager AJ Hinch for one year, fining the team $5 million, and taking away Houston’s first and second-round picks in the 2020 and 2021 drafts was a small price to pay for appearing in the past two World Series, winning one. Especially considering MLB commissioner Rob Manfred stated that the Astros illegally stole signs from opponents during the 2017 season – year they won the World Series.

Many also wondered why, if it was the players on the Astros who participated and benefitted during games from the sign-stealing, why weren’t any of them punished?

Basically, all the players on the 2017 World Series roster get to keep their rings and all they have to do, IF they happen to still be on the Astros’ roster when spring training starts up in February is apologize.

Whether they follow through with any apologies remains to be seen, and seems unlikely, as the MLBPA may put a kibosh on even that small mea culpa.

The reason being reported for why Astros players did not receive any punishment from MLB is so MLB it hurts.

According to the Wall Street Journal, it’s because Manfred and MLB believed that if they did punish players they would end up losing any grievance hearings so instead they just gave the players immunity in exchange for their testimonies.

The main reason MLB felt it would lose any grievance hearings is because the Astros’ front office very conveniently failed to pass on Manfred’s 2017 sign-stealing memo to its players.

One reason why MLB agreed to grant immunity to players in the sign-stealing investigation: The league thought it would lose grievance hearings, in part because the Astros' management never passed on Rob Manfred's 2017 sign-stealing memo to players.https://t.co/mSC8X1UVgs pic.twitter.com/1Y4g1xtvP3

This was an important fact for MLB if it had wanted to try to discipline players. Penalties would have been met with grievances by the MLBPA — grievances that the league believes it would have lost, people familiar with the matter said.

After all, Manfred said, Hinch knew the sign-stealing was going on and didn’t stop it. Bench coach Alex Cora was an active participant in the plots. So was outfielder Carlos Beltrán, a respected veteran. Therefore, the union could have successfully argued in a grievance hearing that the players didn’t know they were in the wrong, since their superiors never directly informed them and even appeared to condone their behavior. (Cora and Beltrán both lost their jobs last week as the manager of the Red Sox and New York Mets, respectively.)

Once again, news surrounding how this whole debacle was handled by MLB and the Astros organization is not sitting well with fans and players.

The Houston Astros players actually had to be given a memo from the Commissioner’s office about sign stealing????? These adult, grown men couldn’t figure out for themselves that was cheating????? WOW!!!!!

So if the players took knives out of their back pockets and started cutting opponents would that have been ok since Astros management never told the players that was not allowed?....

"Didnt know they were in the wrong?" What kind of horse manure is this?? #cheatingiswrong

They need a memo not to cheat? GTFOH

So, you hand out punishments and then lose in the hearings. At least you tried. Lame excuse.

cheaters dancing and screaming "diplomatic immunity" as they hold up their championship rings...

Related…
• Former A’s Teammate Says Mike Fiers Told MLB Astros Began Cheating In 2014, Continued Into 2019
• 1993 Cy Young Winner Jack McDowell Says Tony LaRussa Stole Signs Using A Camera With The White Sox In The 1980s
• ESPN’s Jessica Mendoza Is Getting Dragged For Her Horrible Take That Mike Fiers Shouldn’t Have Outed The Astros
• Pete Rose Goes On Rant About Why The Astros’ Cheating Is Way Worse Than Him Betting On Baseball Games
• Mike Clevinger Puts Astros Pitcher Lance McCullers In A Body Bag After He Tries To Clap Back About Cheating