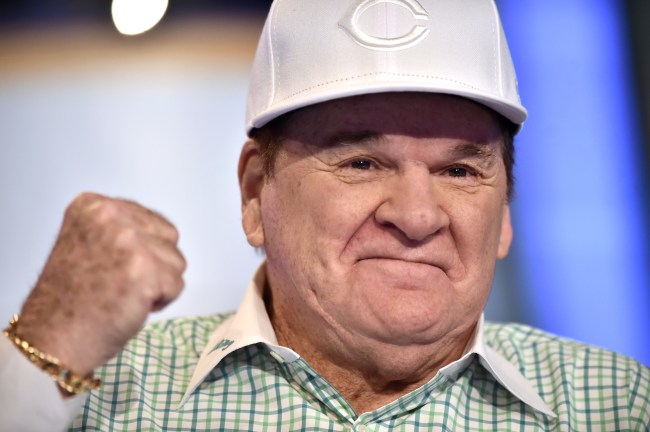 Pete Rose continues to be in exile from the Baseball Hall of Fame, a battle that he’s lost — and will (probably) continue to lose — for decades after he was found betting on games while playing for, and managing, the Cincinnati Reds in the ’80s. Although he’s MLB’s all-time hits leader, Rose continues to serve a lifetime ban from the sport, something that the 79-year-old has openly discussed for the past 30-plus years.

While Pete Rose gambling on games continues to be ridiculed by MLB, it’s recently been compared to what the Houston Astros did in 2017, when the World Series champs were found cheating in a variety of ways — which, ultimately, cost the team’s manager, AJ Hinch, and general manager, Jeff Luhnow, their jobs after initially being handed a one-year suspension by Commissioner Rob Manfred. For Rose, the Astros’ crime was much worse than anything he did, and he’s speaking his mind about the issue.

Talking to NJ.com, Rose applauded Manfred’s harsh penalty to initially suspend Hinch and Luhnow, but opened up about why his crime of betting on games dwarfed the decision by the Astros to cheat in order to win a World Series.

“I bet on my own team to win,” Rose said. “That’s what I did in a nutshell. I was wrong, but I didn’t taint the game. I didn’t try to steal any games. I never voted against my team. I bet on my team every night because that’s the confidence that I had in my players. And I was wrong.

“But this (Astros’ situation) is a little different. It’s a lot different, actually, and I think that’s why the commissioner came down so hard.”

According to Rose though, Manfred fell way short of giving the Astros due punishment.

“So they fire the GM, they fire the manager, and (MLB) probably is going to get (Red Sox manager) Alex Cora, who was the (Astros) bench coach at the time,” Rose said. “But what about the players who were behind this and taking the knowledge? Should they get off scot-free?

“Don’t you have to do something to the players who were accepting the stolen signs? Nothing’s been done. Is that fair?”

So did Pete Rose himself ever do something like steal signs? In the same interview with NJ.com, he claims he resisted any temptation to do so, other than something small. He added that he never used cheating as a way to gain any advantage while at the plate, though.

“When I was playing, I would maybe try to steal a sign from a third-base coach,” Rose said. “What I mean by that, if there was a suicide-squeeze bunt or a steal or a hit-and-run on the way. But in the 14,000 times I batted, I never wanted a guy on second to tell me what was coming. My philosophy was he might say it’s a low-and-away sinker and it’s really an up-and-in fastball, and I get hit in the ribs because you can’t always be a hundred percent sure that the signs are correct.

“It helps if you can steal a sign from a third-base coach, but that’s really not cheating. That’s a third-base coach not doing his job. If you can’t conceal a hit-and-run or a steal sign, you belong in another business.”

Finally, Rose wonders if there will be any punishment for players involved, adding a good point about the guilty parties being both those giving and receiving the signs.

“Most players don’t give a damn about what happens to an organization as long as it doesn’t happen to them,” Rose said. “If I’m a player and every time I bat I’m getting the signs from the dugout, I’m just as guilty as the guy who is giving me the signs.”

“This whole thing … it’s getting technical. I just can’t imagine how many people are really involved. I can’t imagine doing something like that.”

Was Pete Rose gambling on baseball bad? Obviously. Is it a reason to continue to ban one of the all-time best players from the sport and/or Hall of Fame? Probably not. And, given the severity and sketchy tactics that the Astros used while cheating, it’s obvious that sports fans think Rose is being done dirty by MLB.