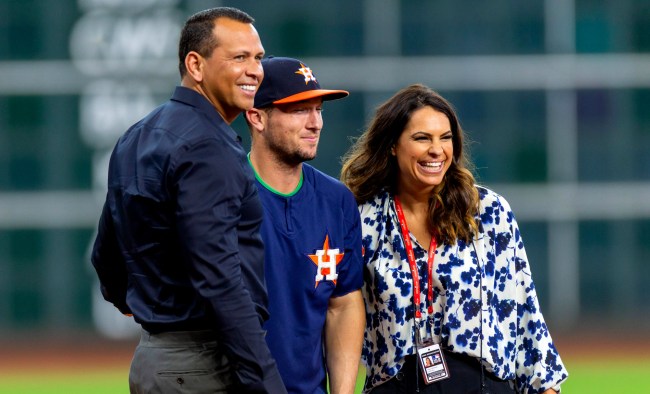 Jessica Mendoza not only broadcasts Major League Baseball games for ESPN, she is also a special advisor working for the New York Mets’ front office. So her latest hot take that pitcher Mike Fiers and the other people formerly in the Astros organization should have kept their mouths shut about the ongoing cheating taking place in Houston, is not going over very well.

During her appearance on Golic and Wingo Thursday morning Mendoza criticized Fiers for blowing the whistle on the cheating Astros.

“I mean I get it. If you’re, if you’re with the Oakland A’s and you’re on another team, I mean heck yeah you better be telling your teammates, ‘Hey look heads up if you hear some noises when you’re pitching this is what’s going on.’ For sure. But to go public? Yeah, that didn’t set well with me,” Mendoza told Mike Golic. “And honestly, it made me sad for the sport that that’s how this all got found out. This wasn’t something that MLB naturally investigated. It came from within. It was a player that was a part of it, that benefited from it during the regular season when he was a part of that team. And that, when I first heard about it, it hits you like any teammate would, right? It’s something that you don’t do. I totally get telling your future teammates, helping them win, letting people know – but to go public with it and call them out and start all of this? It’s hard to swallow.”

Of note: there is a better than average chance that the new Mets manager and former Astros outfielder Carlos Beltran will be receiving some sort of punishment as the investigation continues.

Also of note: Mendoza is dead wrong about Fiers being the reason “this all got found out.” Players and coaches have been complaining about the Astros cheating for several years. Fiers was just the first inside the Astros organization to admit it.

There had been two years of internal discussions, many complaints filed, back channels used, evidence presented…no investigations. Sometimes you have to force the issue or nothing gets done. https://t.co/17NPk9cZGi

Mendoza’s take is problematic on so many levels it makes my head spin.

It’s not like Fiers had any choice but to “benefit” from the Astros cheating. What was he supposed to do? Go public when he was a member of the team?

The fact that she is an employee of the Mets and there are rumors that Beltran will be forced to step down as the team’s new manager, whether it clouds her opinion or not, certainly makes her look really bad for saying things like Fiers “ratted everyone out.”

Jessica Mendoza, a Mets employee, is on a self inflicted credibility killing PR blitz doing the entire ESPN carwash. On First Take, She goes after Fiers again saying he “ratted out” on everyone (ratted being repeated by ESPN host) and then says she got “fired up” about it. pic.twitter.com/8hddkQ1Arv

Frankly, considering her position and the conflict of interest she finds herself in, she shouldn’t be commenting at all. Then again, when has ESPN ever been an unbiased source of sports news and opinion?

This opinion STINKS! Being more upset at the one player who tried to clean the game than the entire team that cheated it.

Also, she says teams didn’t naturally complain about this to the league before Fiers and that’s 100% false.

Let me get this straight: Jessica Mendoza is "sad" for baseball that … a player spoke to reporters about a really big problem within the sport, which was greatly shifting the playing field and damaging careers? That's what she is "sad" about?

This is really gross. Blaming the dude who had the guts to call out egregious cheating?

Mendoza, notably, is a also a part-time member of the Mets' front office. https://t.co/HfKXPwLG6P

Jessica Mendoza was annoyed that the Dodgers wouldn't let her into their clubhouse where she could see club information as an employee of an NL team, an obvious conflict of interest.

What a colossally shitty take by Jessica Mendoza. And I have a hard time swallowing the conflict of interest that exists with her working for the Mets and ESPN. https://t.co/OOrEnBVTSV

Jessica Mendoza's opinion on Mike Fiers basically amounts to "snitches get stitches" and the fact that she said it on national television while being employed by one of the teams dealing with the fallout has made me lose an immense amount of respect for her.

Twitter when Jessica Mendoza said that Mike Fiers was in the wrong😂 pic.twitter.com/Is04zdBqa6

This isn't the first time Jessica Mendoza has said problematic things that conflicted with both of her jobs. Think it's time to choose one or the other at this point

Maybe Carlos Beltran isn't the only Mets employee who should be explaining why they should keep their job. https://t.co/eardE92eje

UPDATE: Mendoza has since attempted to clarify her opinion and her situation with the Mets.