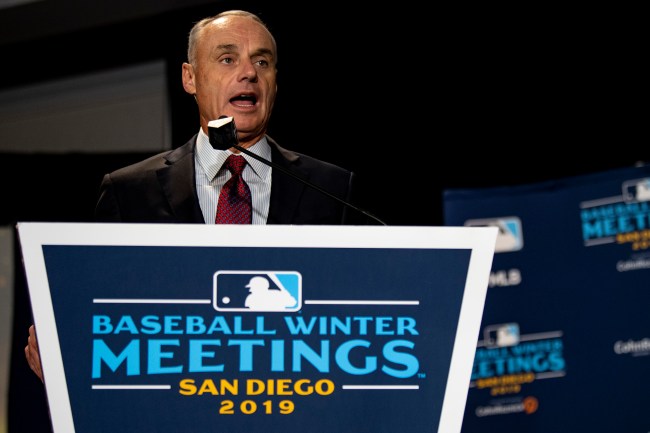 There have been all sorts of chatter about the Los Angeles City Council voting on a resolution to urge Major League Baseball to strip the Houston Astros and Boston Red Sox of their World Series trophies and award those to the Los Angeles Dodgers who were robbed by teams either proven to have cheated or accused of cheating.

I wrote about this earlier today. The Los Angeles City Council unanimously approved a resolution urging Major League Baseball to take the title away from the cheaters and accused cheaters and award those World Series trophies to the Dodgers who faced the Astros and Boston Red Sox in the World Series.

I said this before and I’ll say it again, this all seemed like some UCF bullshit claiming a National Championship and it never seemed likely to go anywhere. Now MLB Commissioner Rob Mandred has responded to the LA City Council’s vote.

Manfred spoke to Fox News Business while at Davos on Wednesday and it appears as if the Red Sox and Astros having nothing to worry about (yet) when it comes to their World Series titles. Here’s what he had to say:

“We haven’t concluded our investigation with the Red Sox, so it’s a little hard to take the trophy away from somebody who hasn’t yet been found to do something wrong,” Manfred told Fox Business Wednesday in Davos. “We don’t know what the outcome of that is gonna be. I think the second flaw is, whatever the impact of the sign-stealing was, it could’ve changed who was in the World Series, absolutely unclear that the Dodgers would’ve been the World Series champion. I think there’s a long tradition in baseball of not trying to change what happened. I think the answer from our perspective is to be transparent about what the investigation showed and let our fans make their own decision about what happened.”

“I think that four really accomplished baseball people — Carlos Beltran, Alex Cora, Jeff Luhnow and A.J. Hinch — lost their jobs over this,” Manfred said. “Nobody likes to see that happen, but I do think it’s the kind of message that will serve as a deterrent for this behavior going forward. In terms of continuing investigation, we have an open investigation on the Red Sox. What I’ve said to the owners is if I have some credible evidence that any other team was involved, they will be investigated with the same thoroughness that we investigated the Astros.”

I really can’t envision a world where Major League Baseball strips either team of their World Series titles because they’d have massive lawsuits on their hands in the fallout. Fans who purchased all of the commemorative gear who feel wronged, players who felt wronged, what about the bonuses everyone received? It just sounds like a logistical nightmare that MLB has no interest in pursuing.

Later, Manfred went on to discuss how MLB will be employing ‘Robot Umpires’ (a camera-based system) during some Spring Training games this year as well as Minor League games next season. This is clearly an experiment to see how this technology can be used to improve the game.