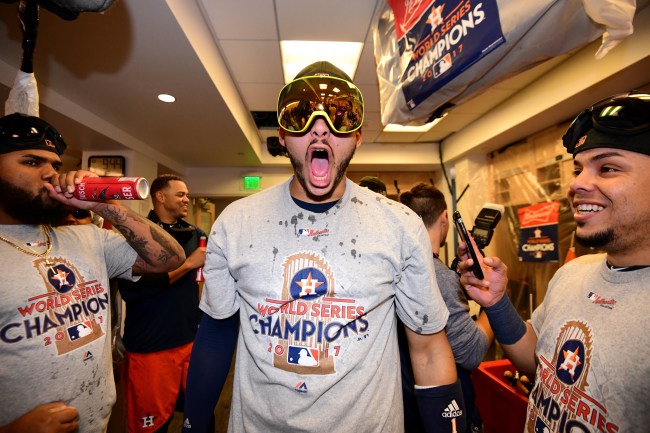 Mike Bolsinger probably isn’t a household name, but the former MLB pitcher did enjoy four seasons in the big leagues, racking up a less-than-impressive record of 8-19 with a 4.92 ERA. While Bolsinger’s stats don’t warrant much attention, something he did on Monday sure as hell does — because the right-hander actually filed a civil lawsuit against the Houston Astros following the team’s cheating scandal, accusing them of unfair business practices, negligence and intentional interference with contractual and economic relations.

Per USA Today, the lawsuit is a way for Mike Bolsinger to help clean up the entire sport of baseball, with the 32-year-old not only seeking unspecified damages, but also hoping that the Astros forfeit the roughly $31 million in bonuses from that season’s questionable World Series title to give to charities in Los Angeles focused on bettering kids’ lives. Bolsinger also hopes the team creates a fund for retired baseball players who need financial assistance.

“There’s a message to be sent to youth out there. Especially athletes, more specifically baseball players,” Bolsinger told USA TODAY Sports. “It was awesome to (grow up and) watch game played the right way. We’ve kind of drifted from that. It’s something we can really express to these kids: You don’t have to cheat to get to where you want to go.

“This kind of stuff doesn’t need to happen.”

It’s an interesting allegation from the former pitcher, but, for those who may not remember — and who can blame you if you do? — the former pitcher did get lit up by Houston during the 2017 season, giving up four runs, four hits and three walks in just one-third of an inning on August 4 of that year while pitching for the Toronto Blue Jays. As it currently stands, it was Bolsinger’s final MLB game, and one that, according to the lawsuit, included bangs on trash cans on 12 of his 29 pitches.

One of the attorneys who filed the lawsuit, Ben Meiselas, had this to add about the allegations.

“The Houston Astros team members and managers were bragging how good their offense was and how productive they were, and it was at the hands of cheating,” Meiselas said. “And the consequence was Mike.”

Following the rough appearance against the Astros, Mike Bolsinger spend the rest of the season in Triple-A, going 1-0 with a save, while posting a 1.93 ERA. Unfortunately, he hasn’t had a sniff of the majors since then.

“I was an older guy. They had younger guys to call up,” Bolsinger said. “Let’s say that (Astros game) doesn’t happen … I probably don’t get sent down. But at that point, they probably lost faith in me and were over it.”

“I don’t think the punishment has fit the crime,” he said. “And let’s be honest, all these guys are going to get managing jobs again. … Guys like us that were cheated? I don’t have a job. I’m not playing.”

While the Astros did get a hefty punishment from MLB — which cost both the team’s manager, AJ Hinch, and its GM their jobs — it doesn’t sound as if Mike Bolsinger is happy with the penalties, which is something Hank Aaron echos as well. And, with this lawsuit, it seems as if he’s looking for a way to get back at the team that did serious damage to his reputation as a MLB pitcher; so it’ll be interesting to see how this all turns out for him.

As of press time, the Astros didn’t have a comment on the lawsuit.