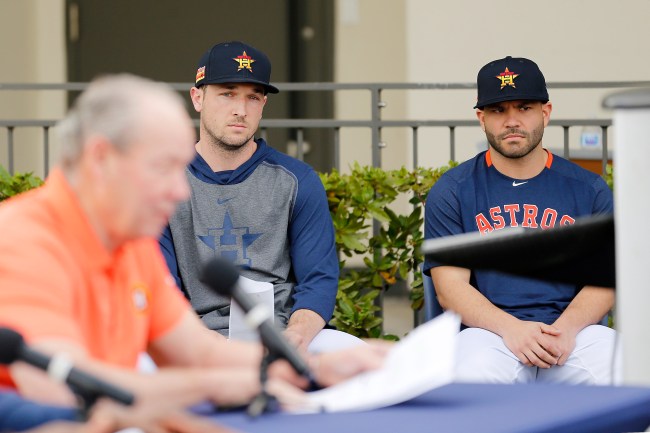 “No, I don’t think I should be held accountable,” Houston Astros owner Jim Crane said in response to a question from the media Thursday morning during the team’s press conference to address the team illegally stealing signs and cheating its way to a World Series title and a second World Series appearance over the past three seasons.

Crane was asked if the sign-stealing impacted competition, he actually replied that it may not have. Seriously, he said that.

Jim Crane: “Our opinion is this didn’t impact the game. We had a good team. We won the World Series and we’ll leave it at that.”

What a moment for "Accountability" pic.twitter.com/QRBrJuEK4P

When asked why players showed no remorse at the Astros FanFest held over the winter, Crane incredulously replied, “They probably just got caught off guard” and “were not prepared.”

Crane also added that the Astros did not cheat at all in 2019 – despite proof to the contrary.

Two of the biggest names attached to the scandal, player-wise, Alex Bregman and Jose Altuve read prepared statements and then headed off to hide in the clubhouse without answering a single question.

Jose Altuve said, “the whole Astros organization and the team feels bad about what happened in 2017. We feel remorse for the impact on our fans and the game of baseball.”

So glad they feel bad.

“I just want to ask for the baseball world to forgive for the mistakes that they made,” said Baker.

All in all it was an absolute disaster and frankly, just made things worse for everyone assocaited with the Astros.

Almost nothing that was said showed any real remorse and basically sounded like a big F you to everyone, which was reflected in the reactions by baseball fans across America.

Scherzer on the Astros: “They crossed the moral line and cheated, but they got to answer for it. It’s not really for us to speak for them, they need to speak for themselves, to talk to the fans of baseball and explain what happened."

The Astros keep digging the hole deeper, they are going to get balls hurled at them every damn game and they deserve it-it’s ridiculous Dusty Baker is doing most of the talking guy wasn’t even there when the cheating happen, this is straight embarrassing https://t.co/2LmdD7nPym

How about we just remove the Astros from the MLB? These “apologies” are absolutely pathetic and not genuine at all. It’s faker than my twin daughters apologizing for hitting each other.

Let’s say someone messes up. Messes up bigly, even. And the truth is that they really don’t care about messing up. At all. In fact, they would do it all over again, and you know this. Asking for a friend, would you rather receive:

Aroldis Chapman responds to Jim Crane's comments that the Astros stealing signs didn't have an impact on the game:

"I disagree with that…when you have an advantage like that, it's definitely going to make you a stronger team" pic.twitter.com/6YW3Q6jVFr

Boone was asked about Crane saying that sign stealing didn’t have an impact on games. “That’s quite a stretch, I think,” Boone said. While Boone said we don’t know the extent of the impact, the cheating obviously had an impact.

Right...they did it because trash can acoustics are good for the soul.

Yes, they had a good team. But of course it impacted the game. If it didn’t impact the game, why continue it? Don’t play the public for fools. Just apologize, be accountable, and move forward. https://t.co/Hf7iFL7FRz

This press conference with Astros owner Jim Crane is a joke. MLB should have stripped their 2017 World Series title and he should have been forced to sell the team. To only blame the fired GM and manager and to not hold the players accountable is A JOKE. #Embarassing #Cheaters

In what world is Jim Crane living in where knowing what pitch type is coming is *not* an absolute competitive advantage?

It's shocking to hear Jim Crane say he didn't think the sign stealing impacting games. Of course, it did. Why else would the Astros have had such an elaborate system to cheat?