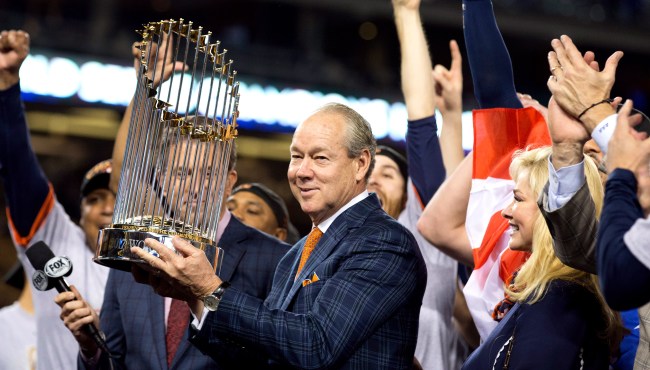 Astros owner Jim Crane, Houston’s Sports Executive of the Year, will reportedly be meeting with the entire team roster as it gathers at Spring Training to discuss the team’s strategy for publicly addressing the sign-stealing scandal that has rocked Major League Baseball.

A source familiar with the situation in West Palm Beach, Florida, site of the Astros Spring Training, told ESPN that even though only pitchers and catchers were required to report to camp on Wednesday, position players have been arriving early in order to be present for the meeting.

Thursday will be the first day the media will be allowed to speak with Astros players at Spring Training.

Last month, while accepting his Houston Sports Executive of the Year Award, Crane told reporters, “The players have been beaten up a little bit. They’ve been all spread out. I saw some of the things with the guys interviewed — they’re just kind of getting some advice to take it easy. When we get down to spring training we’ll get them together and they’ll come out with a strong statement as a team and apologize for what happened and we’ll move forward.”

Speculation was the the Major League Baseball Players’ Union would never let individual players apologize – something agent Scott Boras said they shouldn’t have to do anyway.

On Tuesday, Marwin Gonzalez, now a member of the Minnesota Twins, apologized for participating in the 2017 Astros’ cheating.

Gonzalez now joins pitchers Dallas Keuchel and Charlie Morton in expressing at least some form of regret for the Astros’ illegally stealing signs in their 2017 World Series winning season.

Joe Musgrove, who pitched for the Astros in 2017, recently told MLB Network that he too knew about the cheating taking place, “I was in my first year, man. Along with (Alex) Bregman and a lot of those guys, and in your first year in the big leagues you’re around guys like Beltrán and (Brian) McCann, some big names. And I’m not going to be the pitcher to walk up and tell ‘em to knock it off.”

No players on the 2017 Astros roster have received any discipline whatsoever from Major League Baseball – something that has not set very well with fans as well as current and former players like Trevor Bauer and Pete Rose.