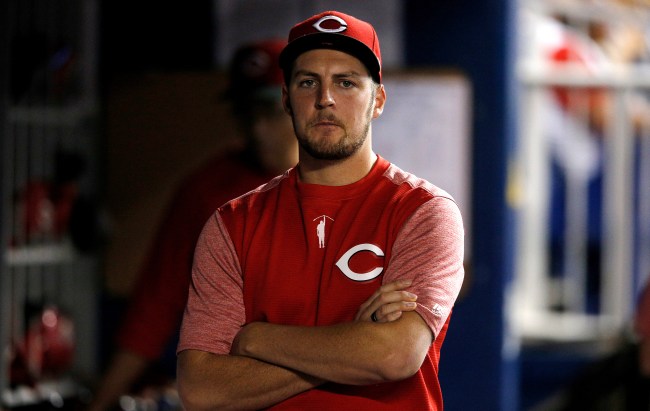 By far the most outspoken player in Major League Baseball when it comes to the Houston Astros sign-stealing scandal (or anything else he perceives as being wrong with baseball) has been Cincinnati Reds pitcher Trevor Bauer.

Bauer, who has never been shy about expressing his feelings, has been accusing the Astros of cheating for a couple of years now and is not at all pleased with how MLB commmissioner Rob Manfred had handled that situation, nor the latest trial ballons he’s floated about completely overhauling Major League Baseball’s postseason.

“No idea who made this new playoff format proposal, but Rob is responsible for releasing it, so I’ll direct this to you, Rob Manfred,” Bauer tweeted on Monday about the potential changes to MLB playoffs. “Your proposal is absurd for too many reasons to type on twitter and proves you have absolutely no clue about baseball. You’re a joke.”

No idea who made this new playoff format proposal, but Rob is responsible for releasing it, so I’ll direct this to you, Rob Manfred. Your proposal is absurd for too many reasons to type on twitter and proves you have absolutely no clue about baseball. You’re a joke.

On Tuesday, Bauer created a scathing video for Momentum (Bauer is a co-founder) in which he (accurately) points out numerous problem Major League Baseball has been ignoring and his complete disdian for MLB commissioner Rob Manfred.

“Just reading through it, without even thinking about it for a second, they’re just wrong,” Bauer begins, addressing the new MLB playoff proposal. “Like, who put this out without thinking of the fact that the best team in the league is going to get a six-day layoff? A seven-day layoff? While we sort out this whole three games here, and this Wild Card, and we’re going to pick out opponent, and we’re going to do this whole reality TV stuff … meanwhile, the best team in baseball is sitting at home waiting for all this crap to transpire. God forbid someone’s ace pitches four days before the end of the regular season, and then has 10 days between starts. This isn’t football where you can heal up and that helps. Being on a routine is so important in baseball. We play for six months. And now you’re going to say at the most critical time of the year that we’re going to get 10 days off or six days in between games, and who knows how the pitching rotation lines up and all this different stuff and that’s supposed to be a benefit?”

Bauer then went off on how Manfred has been handling the media on behalf of Major League Baseball.

“Rob, if you understood media, maybe as the commissioner of baseball you could solve some of these things. Like how in one of your biggest markets [Los Angeles], half the fans can’t even watch the damn game because of TV deals.”

Then he took aim at MLB’s completely unfriendly attitude towards social media.

“On top of that, they can’t even go to Twitter, where all the young people hang out. You can’t even go to social media and see anything about the game. Steph Curry throws a bounce pass in an NBA game and it’s trending with 1.5 million views five minutes later, and Mike Trout goes and launches himself and robs a homer or something and you can’t find the highlight anywhere online! It’s ridiculous!”

“You don’t open it up. Let content go, get it out there. Quit with the stupid cleat policy, the stupid BAM [Baseball Advanced Media] policy, blackouts all over the place — and that’s just dealing with content that we already have available. Like, where’s the innovation in content? Where’s the next thing that’s going to draw fans in? Who’s innovating? Who’s creating something new? Who’s trying to identify with the young fans? God, it’s frustrating, man. Instead we’re going to have a game, if the game is three hours and one minute, no good. But two hours and 59 is good, and that’s going to make it more appealing, or… move the mound back. Or three-batter minimum. Whatever else other stupid ideas are coming out. I don’t know.”

In closing, Bauer said, “So, Rob, if you’re watching this video, you probably won’t, because you don’t even have a pulse on the game that you’re commissioner of. But if you’re watching this video and you want to talk about some stuff, you want some recommendations, hit me up. I’m sure you can get in contact with me. I’m sure you’ll probably be fining me or something like that. So that’s it. That’s all I got to say. Frickin… [throws down his mic].”

Bauer also published an article on Tuesday for The Players’ Tribune entitled “I Wish I’d Been Wrong” in which he addressed his feelings about the Astros’ sign-stealing scandal.

“Personally I think that what’s going on in baseball now is up there with the Black Sox scandal, and that it will be talked about forever — more so than steroids. Like the steroid era, you can say what you want about it, but steroids weren’t really illegal at the time,” Bauer wrote.

“The sign-stealing that was going on in Houston, though, was blatantly illegal. And with the rules that were implemented last year and the year before — that, by the way, were then still broken — it was very clear,” he continued.

“That’s pretty major. I was right all along, yes. And I do feel vindicated. But I wish I had been wrong.”