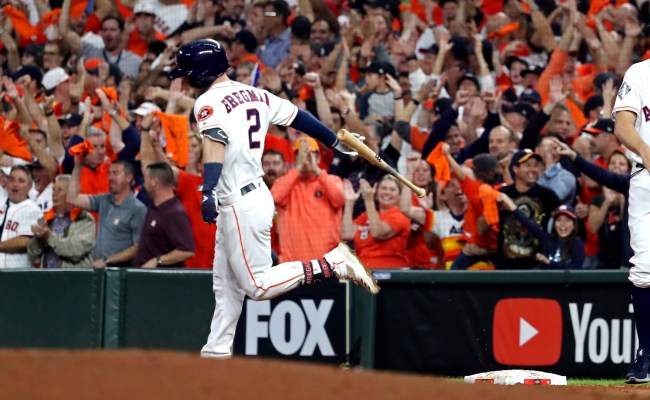 Just a few months ago having 25-year-old Houston Astros slugger Alex Bregman as the spokesman of your brand would have been quite a coup. Which is certainly what the folks over at Eastbay must have been thinking when they signed him to appear on the cover of their February catalog heading into MLB Spring Training.

After all, Bregman is coming off two All-Star seasons where he hit a combined 72 bombs, won a Silver Slugger Award, and appeared in two recent World Series, winning one. What was not to like?

Turns out, there’s a lot, thanks to the illegal electronic sign-stealing scandal that rocked Major League Baseball this past offseason.

Espcially when you consider how much better the Astros, including Bregman, did batting at home versus on the road during their postseason runs.

So when Eastbay’s February catalog showed up in mailboxes across America over the weekend with Bregman on the cover and the slogan “ALWAYS EARNED, NEVER GIVEN” printed on it, fans and more than one Major League Baseball player were more than a little dubious.

Is he serious? He has no shame or remorse! So pathetic! pic.twitter.com/3xMRWm4MzH

Well safe to say I unsubscribed from @Eastbay today. Honestly thought it was a joke at first. Never Given” 😂 yeah except being “given” the signs pic.twitter.com/76NTtzBwNe

Come on @Eastbay, how could you decide to put this cheater on the cover of your mag? ‘Always Earned, never given’? BS! He was given plenty of signs. Not a good look for your company. @Reflog_18 pic.twitter.com/arGNXq4ID4

Does @Eastbay live under a rock? https://t.co/J7uh9TF0KR

What dim person designed this cover??

On the plus side for the company…

The bigger news should be that Eastbay is still around! https://t.co/G1SfLylKSe