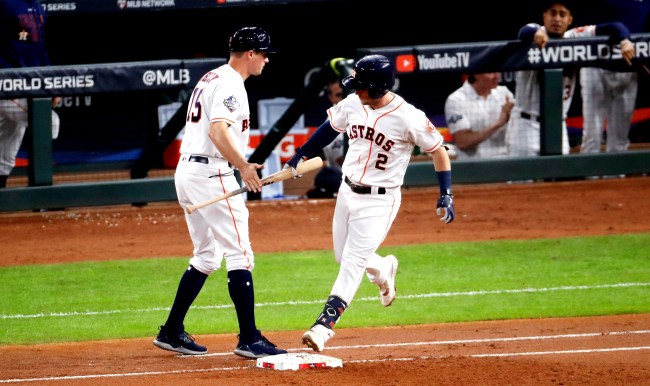 This year’s World Series has turned out to be pretty entertaining. Especially now that the Nationals have tied it up at three games apiece, sending it to a Game 7 with their 7-2 win Tuesday night.

There has been no shortage of drama in the series, and I don’t mean just on the field.

Social media has had much to talk about during this year’s Series.

One of those things occurred in the first-inning of Tuesday’s Game 6 when Astros slugger Alex Bregman launched a moonshot home run off Nationals starter Stephen Strasburg. It was Bregman’s third home run of the series, but that wasn’t what got social media’s attention. It was the fact that after hitting his bomb Bregman carried his bat all the way down to first base and tried to hand it off to his first-base coach, who dropped it.

Later in the game, Nationals outfielder Juan Soto hit his own home run, and he too carried his bat down the first base line in what many thought was him taking a shot at Bregman. Turns out it wasn’t.

Bregman, however, did still get much criticism for his reverse bat-flip, some of it even coming from current and former MLB players.

Bregman … dude taking the bat all the way to first….that’s asking to get someone hurt on your team … next year . Right now focuses on winning #WorldSeries

Bregman is a douche!!!

I know it’s the #WorldSeries but Bregman should get a 100mph fastball in the ear for carrying the bat to first on a HR.

Not everybody hated it though.

First base coach gotta be better than that… lol gotta take the bat lol… I love Bregman as a player. His energy is unmatched. That cockiness and arrogance is something I really admire…

The amount of people that said Alex Bregman needs to be drilled is hilarious. Everybody is a tough guy on Twitter but then you look at their picture and see it looks like the grandpa from Willy Wonka moved more.

What Juan Soto did is the proper revenge. pic.twitter.com/GE8bjcVeja

Why is everyone hating on Bregman for taking his bat to first base? Pedro Cerrano took it all the way home and we love him for it. pic.twitter.com/hHBzIxpsFq

Alex Bregman issued an apology after carrying his bat with him to first base following his first-inning home run ⤵️ pic.twitter.com/8ZHY7NtIq3

Alex Bregman apologized faster for doing something fun and harmless than his boss did for trying to get a reporter fired and ruin her career over an accurate story.