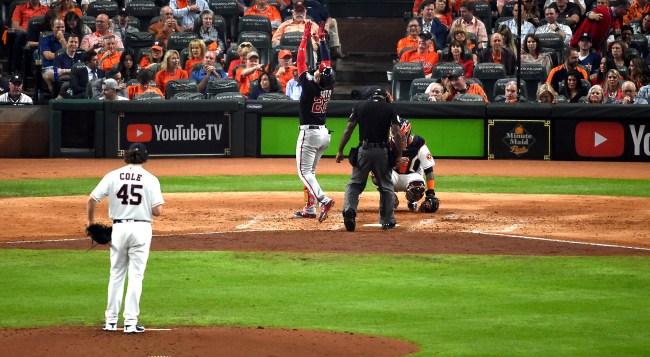 In case you missed it, and damn you if you did, Instagram models Julia Rose and Lauren Summer chose the bottom of the 7th inning of Game 5 of this year’s World Series tilt between the Astros and the Nationals to lift their shirts, revealing to an international audience the fact they neither of them was wearing a bra Sunday night.

For some reason, Rose, Summer, and another model, Kayla Lauren, were asked to leave Nationals Park following this revelation and the next day were “banned indefinitely” from all future Major League Baseball games. This, while totally expected, did not go over well with the ladies.

To clarify, yes we knew we would get banned, yes the letters are real, and yes I would do it again lol. More importantly, subscribe to @SHAGMAG_ because the proceeds go directly to women with breast cancer to pay for their medical bills. 🤘🏻❤️

Mets pitcher Noah Syndergaard gets it.

Not all hero’s wear shirts https://t.co/N91Kf7z4GA

They even chronicled the whole affair in a new YouTube video.

Naturally, a man with some serious World Series cred, Lenny Dykstra, was one of the multitudes who was tuned in and took notice of the models’ breast awareness, I mean breast cancer awareness stunt, and decided that he would be willing to offer the ladies his “insight.”

Does @SHAGMAG_ need any insights from the individual who just so happens to have the highest postseason OPS of anyone still living (minimum 200 plate appearances)?

Isn’t that nice of him?

So complimentary. Such a charmer that Nails.

You’re too kind. Really just a matter of Nails having a soft spot in the heart for a sweet young lady unfortunately being victimized by people drunk with power.

Not banned from Chez Nails.

I’ll sign something for him if it will help this important cause.

Or perhaps I’ll be willing to come over to wherever you need me to be and sign “the girls” if that will help melt his cold heart.

Nails was also very sad that the models got banned.

That’s OK. Here’s something instead that will cheer you up: you can get a VIP pass to the next Nails signing. PS I’ll sign whatever you want me to ; ) #WorldSeriesBoobs

Ladies and gentlemen, your next New York Mets manager!

Could happen if the @PriceIsRight !