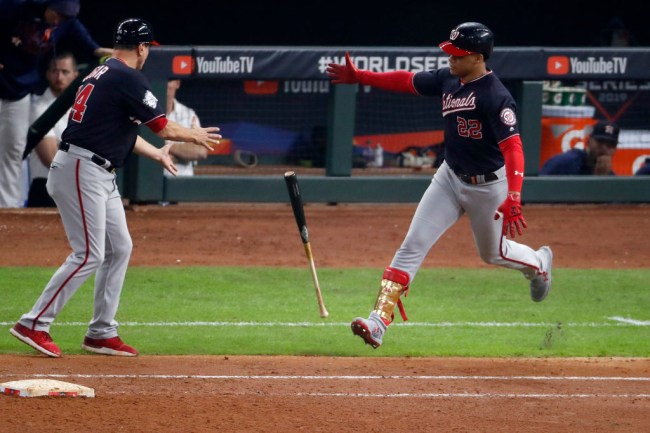 There was some unwritten rule, bat carrying drama during Game 6 of the World Series on Tuesday night. There’s something about guys carrying or flipping bats after hitting moon-shots that really get baseball fans going.

Alex Bregman hit a home run in the first inning and decided to carry his bat all the way to first base before dropping it. It’s sort of the opposite of a bat flip, but since it’s something we never see it goes against baseball’s unwritten rules.

Of course everyone, including the Nationals, took notice.

Juan Soto stepped to the plate in the fifth inning and hit a go-ahead home run of his own and elected to carry his bat to first just like Bregman did. The move certainly felt like it was a shot at Bregman, but it turns out Soto wasn’t taking a shot at or trolling Bregman at all, he just thought it was cool.

So, the 21-year-old Soto simply saw Bregman do it and thought it looked pretty sweet so after hitting a bomb of his own he pulled off the same move, no harm no foul.

While Soto didn’t feel bad about carrying his bat to first, Bregman actually apologized after the game saying that’s not how he was raised to play the game and that his emotions got the best of him. The baseball world is one of its own and this is a prime example of that. Bregman celebrated a home run, didn’t disrespect a single person then felt so bad he felt like he had to apologize.

Soto has five home runs this postseason which is the most by any player ever 21-years-old or younger.