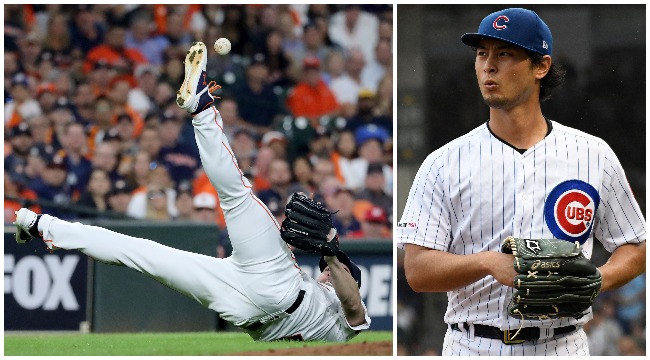 Justin Verlander’s Astros are in deep shit after a bad 12-3 loss at home has put Houston in a 2-0 hole against the Nationals on baseball’s biggest stage.

Verlander didn’t exactly record a gem in the loss either–giving up 7 hits and 4 earned runs in six innings pitched.

The former Cy Young Award winner is likely feeling very shitty at the moment, sensing that at 36 years old, he may need get another shot to win his second World Series.

Enter Yu Darvish to charge out from left field and twist the knife.

A little context: In April 2018 (yes, almost a year and a half ago), Verlander jabbed Darvish on Twitter after the Cubs pitcher hit a double to right field and ran the bases like he had a huge dump in his pants.

Never before have I seen a pitcher throw the ball into his own leg.

Justin Verlander tried to make a play while falling down and ended up throwing the ball into his own leg 😂 pic.twitter.com/skNCND0NTE

Yu, what do you got for us buddy?