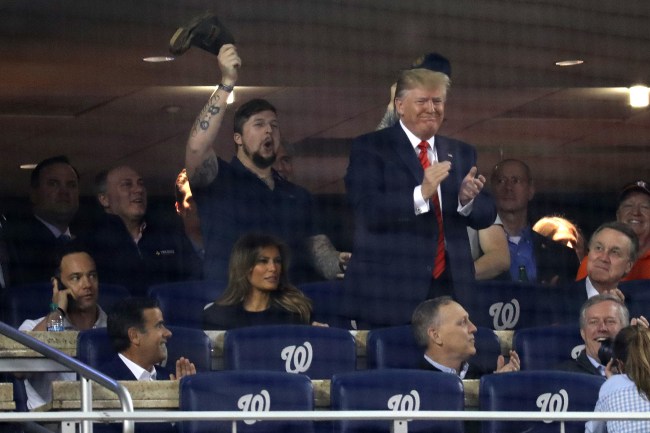 President Donald Trump was welcomed to Nationals Park tonight at game 5 of the World Series with a loud series of boos from the sold-out crowd.

Trump showed up shortly after the first inning and was introduced on the jumbotron after the third inning during the Nationals’ salute to veterans. Trump was immediately booed as soon as he was shown on screen.

WATCH: President Trump met with loud boos as he is introduced at the World Series in Nationals Park on Sunday night. pic.twitter.com/4RTW8ZqxqP

President Donald Trump was just introduced at Nationals Park during Game 5 of the World Series.

Not only was he booed by fans but they also began chanting “lock him up”.

Full on “LOCK HIM UP! LOCK HIM UP!” chants heard throughout the crowd at Nats Park after President Trump was announced and shown on screen here #WorldSeries pic.twitter.com/1ktVXkHYFy

President Trump was booed loudly by the fans at Nats Park when he was shown on the big screen.
Then came a loud chant: “Lock him up.” @wusa9 pic.twitter.com/LBbgSAHd6k