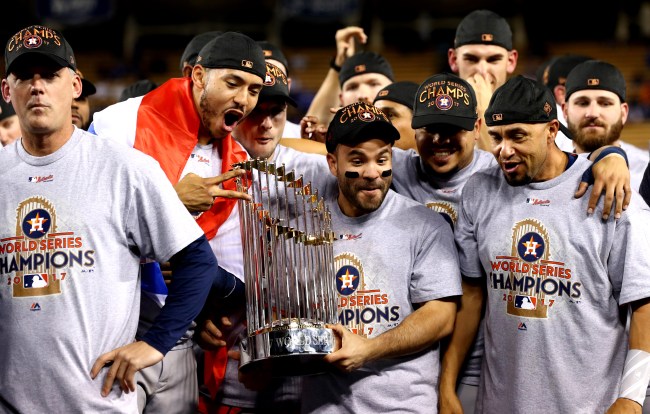 Houston Astros shortstop Carlos Correa has been pretty much the only player from the 2017 World Series winning team that has been forthright in admitting that they cheated their way to a championship.

His was the only statement that came off even remotely contrite when he said, “It’s definitely an advantage. I’m not gonna lie to you. Knowing what was coming. I think you get a slight edge. And that’s why people got suspended and people got fired because this is not right.”

That would be fine except for the fact that if Altuve didn’t cheat (a) why was he one of just two Astros players chosen to be the public face of the players’ apology, (b) why hasn’t he personally come out DEFINITIVELY stating that he did not cheat, and (c) why did he suddenly show up on Monday at Spring Training and take off his shirt in front of the media to show that “horrible” tattoo Correa claimed was the reason why he didn’t want his shirt ripped off last season?

Jose Altuve just walked into the Astros clubhouse, changed his shirt in front of his locker — where a throng of reporters and cameramen were waiting — grabbed a bat and left to go to the batting cage.

He indeed has a tattoo.

Turns out we won’t be getting the answers to those or any other questions from Correa as on Monday he informed the media that he is done talking about the Astros’ sign-stealing scandal.

Carlos Correa: “Honestly guys I’m done talking about the offseason and what happened..For me it’s time to talk about the upcoming season.” pic.twitter.com/0uUD91464A

You know who isn’t done talking about the Astros’ sign-stealing scandal? The rest of the players in Major League Baseball including some of the biggest names in the game.

On Monday, perhaps the best player in MLB Mike Trout weighed in and said about the Astros cheating, “They cheated…I don’t agree with the punishment…I lost respect for some of those guys. Going up to the plate knowing what’s coming…that would be a lot of fun.”

Mike Trout on the Astros: “They cheated…I don’t agree with the punishment…I lost respect for some of those guys.”

“Going up to the plate knowing what’s coming…that would be a lot of fun.”

Cubs superstar Kris Bryant told the media on Saturday that the Astros’ press conference to apologize for cheating was “a disgrace.”

“Watching their apology … there’s no sincerity, there’s no genuineness when it comes to it,” said Bryant, according to The Athletic. “I certainly know that if I messed up big in that way, I’d be the first one to let you know just how big of a mess-up it was. It’s just hard to believe.”

He added that he thought what the Astros did is worse than steroids, “Steroids, you still have to compete and hit the ball,” and that he believes the players should have been punished, “If I did it, I would accept a punishment. You would have to. I thought the whole punishment was weak.”

Toronto Blue Jays slugger Vlad Guerrero Jr. said when asked about the Astros’ cheating replied, “If I knew what was coming, I’d hit .500.”

Vlad Guerrero Jr. on the Astros sign-stealing saga: “If I knew what was coming… I’d hit .500” pic.twitter.com/VSxwyiF62n

Kansas City Royals second baseman Whit Merrifield who might have been an All-Star Game starter in 2017 if Houston wasn’t cheating, really laid into the Astros, “I used to really respect those guys and respect their games. For me, I have no interest in hearing about them, talking to them, interacting with them at all anymore. I have no respect for those guys anymore.”

Merrifield added, “The ripple effect of what they were doing is tremendous. It cost people jobs. It cost people opportunities in this game. It cost people millions of dollars, and it cost people a chance at experiencing world championships. It’s disgusting what they did. It discredits everything that those players have ever done in my opinion and in a lot of people’s opinion that I’ve talked to.”

#Dodgers Justin Turner: "The more that comes out and the more that's been said the more frustrating it gets for us. … It's snowballing. I think it's pretty obvious whatever the commissioner thought he did, he didn't do it very well."

Turner on Manfred referring to World Series trophy as a piece of metal: "For him to devalue it the way he did yesterday just tells me how out of touch he is with the players in this game. At this point the only thing devaluing that trophy is that it says 'commissioner' on it."

Dodgers pitcher Yu Darvish, who got hit hard in the 2017 World Series by the Astros, wonders why the Astros weren’t stripped of the title.

Darvish raises issue of why Olympians get stripped of medals for cheating, no similar penalty for Astros

Indians pitcher Mike Clevinger agreed that what the Astros did was worse than steroids and flat out said, “I don’t think any of those motherfuckers should be able to look us in the eye.”

And don’t even get Reds pitcher Trevor Bauer started.

What a freaking mess.