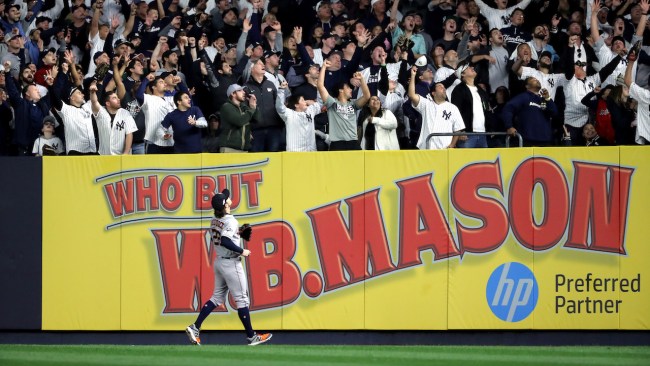 They say that Millenials have killed tons of tried and true institutions such as napkins and J. Crew and department stores and Scion and light yogurt. And while that all may be true, what we’ve really killed is competitive spirit.

Take Houston Astros outfielder Josh Reddick, for example, who went full-blown crying-in-the-corner softie when discussing the behavior of some New York Yankees fans during Game 3 of the ALCS on Tuesday night.

Speaking to reporters following the Astros’ 4-1 victory over the Bronx Bombers, Reddick spoke out about the rowdy fans in the bleachers of Yankees Stadium and couldn’t have possibly sounded more like the embodiment of the pussification of America if he tried.

“I think I saw probably seven or eight water bottles out in the outfield, two baseballs got thrown from center to left. So it’s scary. I don’t think a lot of people realize how dangerous that can really be. You throw a baseball hard enough and it hits somebody in the head and we’re not looking, it could do some damage to you as a player,” Reddick said after the Astros’ 4-1 win in Game 3 of the ALCS.

“So it’s definitely disrespectful, but at the same time, very unsafe.”

Look, I get that fans shouldn’t be throwing objects on the field, but come on Reddick, let’s sack up a little bit here, shall we? You’re getting paid millions upon millions of dollars a year to soak up some sun, travel the country, hang out with your buddies, and play some baseball. Maybe turn the other cheek when a couple of extra rowdy fans in the bleachers get a little too aggro.

If they were chucking D batteries like they used to, fine, I get it, but it’s difficult for me to qualify water bottles as “scary”. In fact, my issue isn’t so much with Reddick’s sentiment but his choice of adjectives. That movie Hereditary is scary. Waiting for a doctor to call you back with test results is scary. Drunken asshole Yankee fans chucking plastic water bottles from a couple dozen feet away? Not that scary.

The Yankees and Astros will pick up the ALCS tonight with Game 4 in the Bronx (although it’s looking like it’s going to be postponed due to rain).