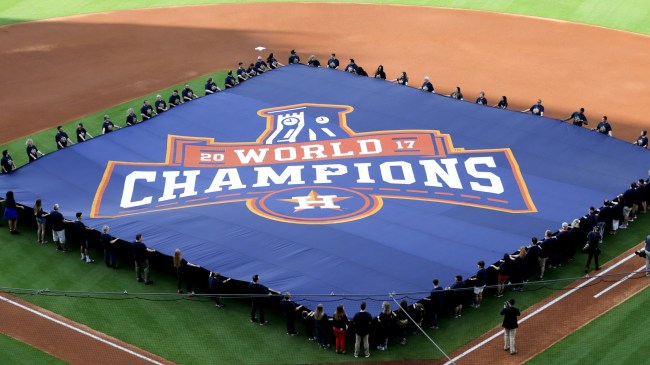 The Houston Astros (and Major League Baseball commissioner Rob Manfred) just flat-out cannot get out of their own way when it comes to dealing with the fallout of their sign-stealing scandal.

From the disaster of a press conference given by Astros owner Jim Crane, new manager Dusty Baker, and players Alex Bregman and Jose Altuve to hypocriticial interviews given by players like Justin Verlander the reactions from fans and some pretty big name players on other teams have been rightfully visceral.

Now comes word from new Houston Astros general manager James Click that employees tied to the “Codebreaker” program used to illegally steal signs are still with the team, according to Brian T. Smith of the Houston Chronicle.

But it’s okay, baseball fans. Those employees will now be held to a zero tolerance policy moving forward.

Click said employees tied to Codebreaker in WSJ reports are still with Astros. Emphasized that organization will have a zero tolerance policy moving forward.

Perhaps those employees who helped forever tarnish at least one World Series’ true punishment is getting their feelings hurt, just like the players, right, Mr. Manfred?

Fans, as one would expect, did not accept Click’s explanation for keeping the employees associated with “Codebreaker” on the payroll.

Astros in ‘17: We have a Zero Tolerance policy regarding DV!

Astros in ‘20: We have a Zero Tolerance cheating policy!

*stay tuned for what happens next!

Don’t do it again!! (Thanks for what you did)

It's ok. He put them on double secret probation.

Well, there you are. I guess we can rest assured everything will change now.

Why not. MLB gave the team a slap on the wrist. The owner says they earned the WS win. So why fire anyone. He's proud of them.

This is a F*ing joke, right?

Bregman said it’s been a tough month. Has received support from people close to him. Trying to learn from everything and grow. #Astros pic.twitter.com/nllBOCXvH7

Altuve said he appreciated what Correa said but would not discuss anything specific about sign-stealing system. Again answered with a focus on entire team. #Astros pic.twitter.com/vk9nEuCMvD