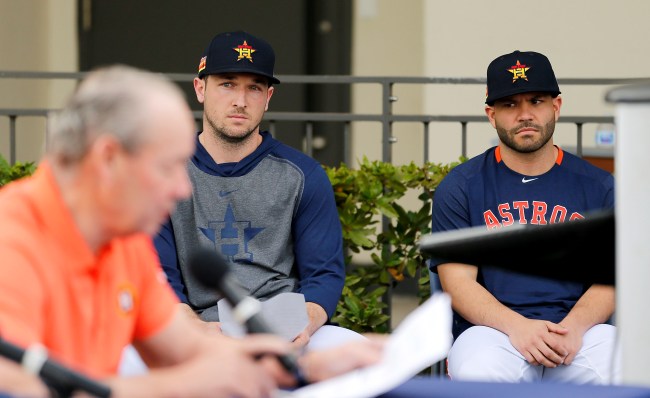 Houston Astros owner Jim Crane is in full-on damage control mode after a number of missteps with regard to the team’s sign-stealing scandal (several of them his own), and yet, it still appears as though he, like MLB commissioner Rob Manfred and many Astros players, still don’t fully grasp the situation.

There is not only much discontent among Major League Baseball fans and players of opposing teams, one Houston Astros fan is suing the team for $1 million for raising ticket prices after the team cheated to win the 2017 World Series.

Security taking signs from Astros’ hecklers during Spring Training games and one of the team’s affiliates pulling seats from the law firm that filed lawsuits on behalf of Astros season ticket holders who want their money back are only serving to reinforce the hatred.

It is those season ticket holders that Crane addressed in a letter Friday night (the best time for news to get buried) in which he said he was “very sorry” and “will make Houston proud again.”

Crane added, in a rather dubious note considering his and the organization’s actions this spring, “I want to assure you that I recognize the impact to our fans and to the game of baseball.”

To our Valued Season Ticket Holders,

As we get ready to play our first Spring Training game, I want to reach out to all of you and say thank you for your support through an extremely difficult offseason.

I know this has been hard on each of you, the City of Houston, and all baseball fans throughout the country. People in our organization broke the rules. We were wrong, and we let you down. I want to reiterate what I said to you on January 13th — I am very sorry.

Since I found out about the sign stealing issues, I have been focused on making changes within our organization to ensure that this type of thing never happens again. We will regain your trust, we will continue to give back to our community, and we will make Houston proud again.

I know how difficult it is for each of you to see so much negativity directed at our beloved Astros. Unfortunately, we deserve that criticism. Our actions have left an indelible mark on baseball. I want to assure you that I recognize the impact to our fans and to the game of baseball. I promise you that, as hard as I worked to rebuild the Astros into a championship caliber team, I will work even harder to repair our reputation.

As we begin this season, I am encouraged by the outpouring of support that we have received from our fans, the sponsors, and the entire Houston community. I am optimistic about our future. Dusty Baker and James Click are men of exceptional character who are committed to bringing another championship to Houston. They will be leading a great group of players who will be taking the field in search of redemption.

We ask that you forgive us and that you continue to support our players and this organization.

We greatly appreciate each of you. We look forward to seeing you in Houston for Opening Day.

From an email Jim Crane sent out to #Astros season ticket holders today. (Yes, I am one). pic.twitter.com/qcG6HdMbuJ

There are a LOT of people that are looking forward to seeing Crane and the Astros on Opening Day.

If Crane thinks things are bad now, wait until a story published in the Wall Street Journal on Saturday gains more traction.

Nine years ago, Major League Baseball owners and executives privately wrestled with a difficult question: Should they allow Jim Crane to buy the Houston Astros?

The Texas businessman had offered $680 million to purchase the team, a sum that would mark the second-highest price ever for a baseball franchise at the time. But behind closed doors, owners and executives, including then-commissioner Bud Selig, were concerned about Crane’s business history, people familiar with the matter said.

Just three years earlier, Crane had abruptly backed out of a previous deal to buy the Astros. Before that, his logistics business faced allegations of bigotry, sexism and systemic discrimination. His company was later accused of price fixing and defrauding the U.S. government to profiteer off the Iraq war.

Perhaps that was where Crane first came up with his now infamous phrase, “I don’t think I should be held accountable.”

Related: Poor Kate Upton Is Getting Crushed On Twitter For Wishing Justin Verlander A Happy Birthday