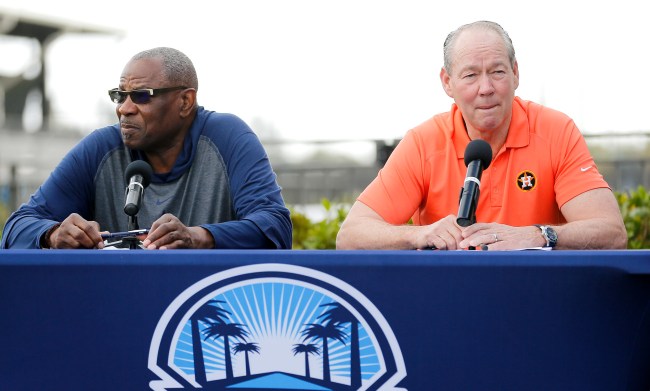 Perhaps Houston Astros players have been so completely clueless with regard to the impact and the anger that has been produced by the team’s sign-stealing scandal that helped the team cheat its way to a World Series title in 2017 is just a reflection of the franchise’s owner Jim Crane.

After all, it has been very apparent in both his words as well as his actions that Crane has no idea how badly he and his team have looked in addressing the scandal.

It began when Crane, at the Astros “apology” press conference actually said the Astros stealing other teams’ signs illegally didn’t have any impact on the outcomes of games.

What a moment for "Accountability" pic.twitter.com/QRBrJuEK4P

Crane, the Houston Sports Executive of the Year, also claimed to believe that he, as the owner of the franchise, should in no way be held accountable for the actions of his general manager, manager, and/or players.

This despite having weeks to formulate a plan to show contrition, which the team obviously did not do as when Crane was asked why players showed no remorse at the Astros FanFest held over the winter, he replied, “They probably just got caught off guard” and “were not prepared.”

Now it turns out there is reportedly a very good reason why Crane and his players “were not prepared.”

According to Bob Klapisch of the New York Times, “One MLB executive says [he’s] ‘not shocked’ at how poorly Astros have handled current crisis. Jim Crane was warned about coming storm, urged to gather his players to prepare for industry reaction, media questions. Crane passed on the idea. Said, ‘It’ll blow over by spring training.'”

One MLB executive says he “not shocked” at how poorly #Astros have handled current crisis. Jim Crane was warned about coming storm, urged to gather his players to prepare for industry reaction, media questions. Crane passed on the idea. Said, “it’ll blow over by spring training."

Lanny Davis, a crisis management expert who spoke to The Athletic about the Astros scandal, stated the obvious when he said, “What the Astros did wrong in one word is ‘everything.'”

Davis, a lifelong baseball fan, also said about the Astros’ press conference, “What they did (last week), they’re in more trouble. When you’ve done something wrong, that’s not the problem. The problem is how do you fix it. They’ve embarrassed themselves for a very long time. Everybody knows they weren’t speaking from the heart.”

Then again, that’s nothing knew for Astros management.

Remember when the team banned a Detroit Free Press beat writer from the clubhouse because pitcher Justin Verlander didn’t want to talk to him? Or when Houston denied a Sports Illustrated report that assistant general manager Brandon Taubman had taunted several female reporters and then fired him because it was true? Or when then general manager Jeff Luhnow lied about not having the chance to apologize to the author of the Sports Illustrated story which the team called “misleading and completely irresponsible,” Stephanie Apstein?

No wonder we’ve reached the point now in the Astros scandal where none other than Jose Canseco has become a voice of reason.