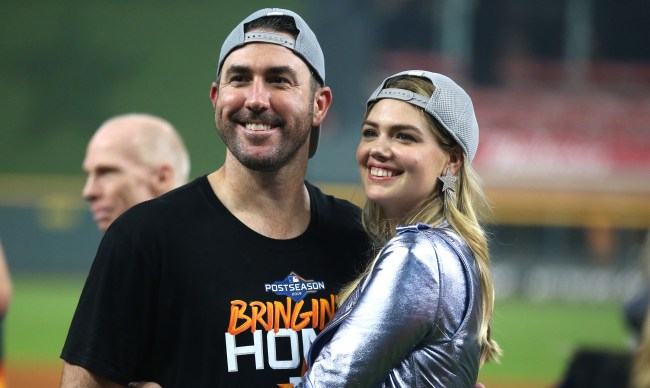 Swimsuit model Kate Upton either learned nothing from the visceral response from Major League Baseball fans to her tweet earlier this month wishing her husband Justin Verlander a Happy Valentine’s Day. Orrrr, she just doesn’t give a damn.

My guess is that it’s probably the latter because she can’t be that obtuse, plus if we have learned nothing over the past couple of weeks it’s that just about everyone even remotely associated with the Houston Astros is unable to just shut their mouths, put their heads down, and deal with the self-inflicted fallout from the team cheating its way to a World Series title.

After all, Verlander got his ring, and another Cy Young Award at the ripe old age of 36, not by cheating of course, so screw everyone who actually gives a shit about things like integrity and honesty.

After all, when you’ve been paid over $229 MILLION to throw a baseball, who needs those sorts of things?

But *ahem* I digress.

On Friday, Upton once again took to Twitter to send her hubby a message, this time to wish him a happy 37th birthday.

“Happy birthday to my best friend! I love you @justinverlander! 02/20/2020 must mean something special because it looks cool!” she tweeted.

Happy birthday to my best friend! I love you @justinverlander! 02/20/2020 must mean something special because it looks cool! pic.twitter.com/sKJD9hV0ag

As Upton surely knew when she typed that, the comments on her tweet regarding her husband have not been kind.

The first LEGITIMATE ring on his finger 🙂

Trying to think of a scenario where your cheating might benefit him, because we know he's ok with that.

Does @justinverlander cheat on his marriage like he cheats at baseball?

They should announce every Astros pitch over the PA before its thrown.

Here’s a thought, and I am just spitballing here, but maybe, just maybe, Upton should for the next few weeks just share her feelings about her husband with her husband, like people used to do back in the dark ages before the internet, and not on social media.

Then again, it is 2020 and if you’re a celebrity if you don’t do it on social media I guess it didn’t really happen?

Kind of like the Houston Astros legitimately winning the World Series in 2017.