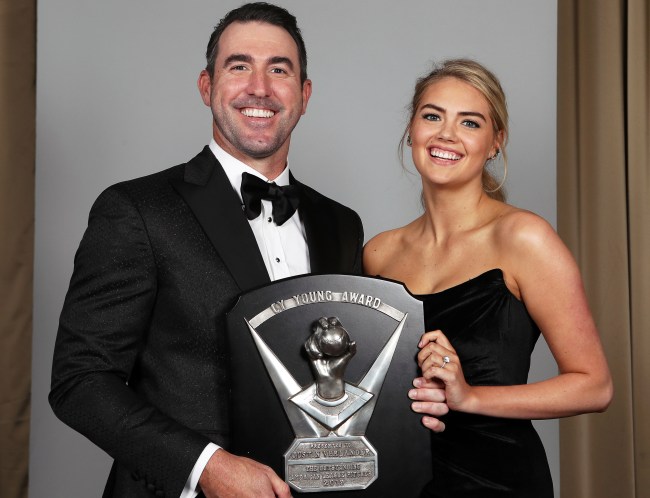 Kate Upton wished her man, Houston Astros pitcher/hypocrite Justin Verlander a Happy Valentine’s Day on Twitter on Friday, which was probably not the best idea she’s ever had, as the comments she’s been getting have been brutal.

Then again, Upton, who has never been shy about her loyalty to Verlander, surely knew that she would eviscerated and if she’s anything like the rest of those associated with the Houston Astros didn’t give a fuck, because, scoreboard, he already got his ring and there’s nothing that Cody Bellinger, the Dodgers, or the fans can do about it thanks to MLB commissioner Rob Manfred.

That’s right, she actually chose this week to break out “My Verlantine” as if baseball fans with their pitchforks at the ready would find it cute.

Just here for the comments. pic.twitter.com/9tcKGiGIuq

He’s ok with cheating. Be careful.

Aww you mean “ your cheater”

Your Verlantine is a cheater and will be labeled that for the rest of his life.

Any buzzers under the shirt?

Be careful he's a cheater!

Ohhh so he IS alive? Considering he usually never shuts his fat mouth and has been awfully quiet lately, I thought that maybe he wasn’t alive. Glad he’s ok and doing well.

"If there is proven intent to cheat: you test positive or it’s found that you were taking an illegal substance, PEDs, and trying to cheat the system, trying to go around it, I think it should be a ban from baseball” -- JV

You guys are adorable.