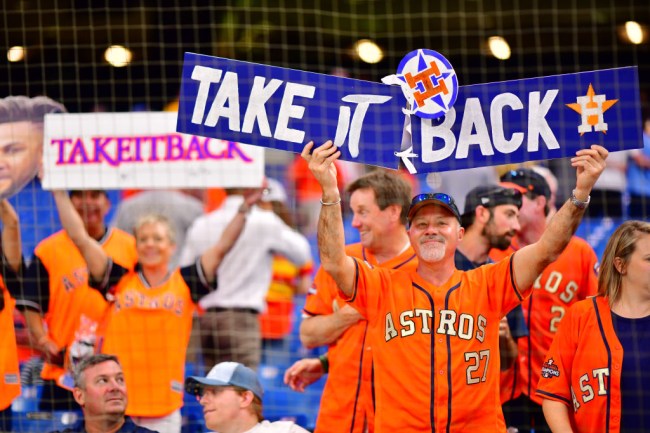 Major League Baseball is currently dealing with the biggest scandal it’s had on its hands since it spent a couple of decades turning a blind eye to countless players sticking needles full of steroids into their ass in the locker room courtesy of the Houston Astros, who were busted last year for coming up with a blatantly illegal strategy to steal signs on their way to securing the first World Series championship in the history of the franchise in 2017.

While members of the organization denied the allegations when they initially came to light, it didn’t take long for people to dig up some pretty damning videos and discover a few statistical anomalies that seemed to back up the claims that they’d dreamed up an electronic system that allowed them to tip pitches to batters by banging on a trash can (and possibly using buzzers hidden in their jerseys).

The MLB quickly launched an investigation to look into the matter, and last month, the league underwhelmed the entire baseball world when it announced it was punishing the Astros by fining them $5 million, taking away some draft picks, and suspending GM Jeff Luhnow and manager A.J. Hinch for a year (both men were swiftly fired when the news broke).

The scandal eventually claimed a couple of other victims after the Red Sox parted ways with Alex Cora and the Mets opted to kick Carlos Beltran to the curb before he even managed a single game for the team.

However, commissioner Rob Manfred declined to punish any of the players who were on the Astros roster in 2017, and over the weekend, he riled up fans who’ve been lobbying for the league to strip Houston of their title by referring to the World Series trophy as “a piece of metal” (I assume guys who spend their entire career dreaming of getting to raise it above their heads would beg to differ).

Now, the team gets to deal with another headache courtesy of a season ticket holder who recently filed a $1 million lawsuit against them for screwing over fans who were forced to shell out more dough to get into games after the Astros used their championship to justify boosting the price of admission.

According to The Houston Chronicle, Adam Wallach is suing the team on behalf of season tickets holders who were overcharged for what the court filing describes as a “deficient product,” as he claims the Astros knowingly exploited fans by using their championship* to justify hiking the cost.

As the outlet notes, the franchise is also dealing with a few other lawsuits stemming from the scandal, including a couple of cases concerning fantasy baseball players who lost out on potential winnings thanks to the team’s illicit scheme.

I’m sure the Astros (and, based on Manfred’s recent comments, the league) would love for this entire thing to blow over sooner rather than later but I have a feeling things are just getting started.