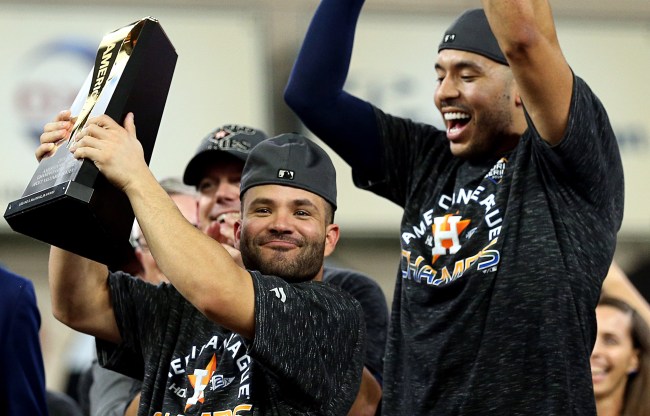 The Houston Astros just announced they will be holding a public ring ceremony on March 27th to celebrate their 2019 American League Championship Series win. Seriously. This is actually happening. Now.

Whoever is running the Astros’ crisis management progam should be fired and never, ever get any kind of job in public relations again.

The Astros announced in a press release on Wednesday…

The Astros will have their ring ceremony on March 27 and all fans will receive a replica ALCS Trophy presented by Coca-Cola. Fans can also enjoy postgame Friday Night Fireworks presented by ConocoPhillips.

On March 28, Justin Verlander and Yordan Alvarez will be presented with their Cy Young and Rookie of the Year awards and all fans will receive American League Champions replica rings presented by Chevrolet.

In the series finale on March 29, Alex Bregman, Zack Greinke and George Springer will be presented with their Silver Slugger awards and Greinke will also receive his Gold Glove award. All fans will also receive a Jose Altuve ALCS MVP Bobblehead presented by Coca-Cola.

Wow. So much to unpack, expecially Alex Bregman getting his Silver Slugger Award.

Also, don’t know about you, but I fully expect 20 to 30,000 replica ALCS trophies and Jose Altuve ALCS MVP bobbleheads to end up on the field at some point during the game on March 27th.

I am also guessing that any headline celebrating these awards will hold up just about as well as this one from 2018 following the Astros’ World Series win*.