MLB Scout Says League Will Need ‘Riot Teams, SWAT’ To Protect The Astros In Their First Game At Yankees Stadium 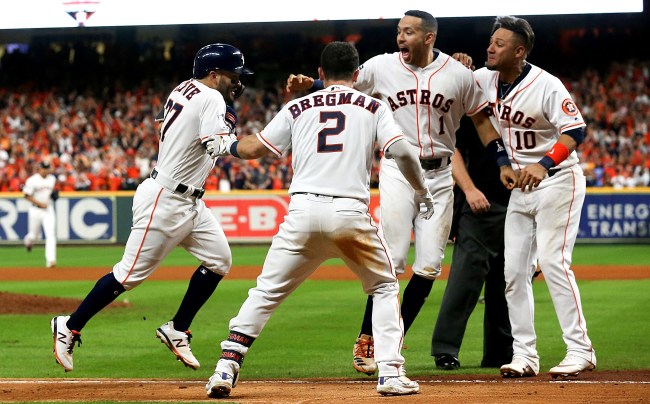 If you think the Houston Astros have it bad now, getting heckled and hit by pitches in Spring Training, after being found guilty of cheating their way to the 2017 World Series title using illegal methods of sign-stealing, just wait until they get to the Bronx for their first game against the New York Yankees.

As you may recall, the 2017 American League Championship Series presented by Camping World (seriously, that’s what is was called) the Astros defeated the Yankees 4 games to 3 to move on and play the Los Angeles Dodgers in the World Series that Houston ended up winning, also 4 games to 3.

You may also recall that in the 2019 American League Championship Series presented by GEICO (again, that’s really what is was called – so MLB) the Astros again played the Yankees and won that series in six games when 2017 American League MVP* Jose Altuve hit a walk-off two-run home run off Aroldis Chapman.

if anything, its just weird. I asked @trevorplouffe if its normal to go on and off with the undershirt for fielding and hitting and he said 'lol no'

The fallout from all of that has resulted in more than a little bad blood between the teams.

And that’s just the players… what do you think Yankee fans will be like, thinking they got robbed of two World Series appearances in the past three years?

One MLB scout is legitimately concerned for the Astros players’ safety, telling Jon Heyman, “I can’t imagine the first game Astros play in New York. You’re literally going to have to bring in riot teams, SWAT, etc. It is bad with 2,000 fans and three-quarters are 90+ years. Continuous booing, cheaters, every pitch something. No idea how these guys can block it out during season.”

Scout in spring: “I can’t imagine the 1st game Astros play in NY. You r literally going to have to bring in Riot Teams, SWAT, etc. It is bad w/2K fans and 3/4 are 90+ years. Continuous booing, cheaters, every pitch something. No idea how these guys can block it out during season”

Remember, during the 2019 season, before any of this Astros cheating stuff was confirmed, Houston outfielder Josh Reddick, who has not been very smart this spring when it comes to shutting his mouth and just playing ball, was whining about how scary, dangerous, and disrespectful Yankees fans were, calling the situation “very unsafe.”

Reddick might want to suddenly come up with an injury when Houston goes to New York. Because you know what else will unsafe when the Astros play the Yankees?

Astros players when they see Aroldis Chapman warming up even though it’s 8-1. pic.twitter.com/8OqffJ9Dyo