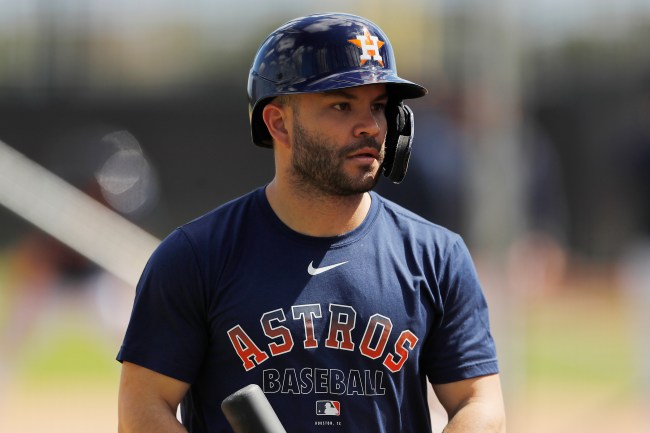 Jose Altuve, one of the main figures in the Astros cheating scandal, was greeted with loud boos by fans prior to his first at bat during Houston’s Spring Training game on Monday.

Once the games start to count, Altuve and his teammates can expect a few pitches to make their way into the batter’s box with them as well.

Altuve with the not so warm welcome today. pic.twitter.com/WwfYzyEv6I

One Dodgers fan wearing a Kershaw jersey couldn’t help but heckle Altuve while he was on the on-deck circle.

Pre game #Dodgers fan giving it to Altuve but Astros fan has his back. #Astros pic.twitter.com/jwBYMPqk9Q

Apparently Altuve was unintentionally hit by a pitch in his third at bat but we still don’t have any video of it so far.

Altuve actually was hit by a pitch on his third plate appearance Monday, but it was unintentional. An off-speed pitch got away from Tigers reliever Nick Ramirez and it hit Altuve on the lower leg

Fans still celebrated Altuve getting pegged despite the fact that it was unintentional.

Altuve hit by pitch in his third at-bat

ALTUVE ALREADY HIT BY PITCH. YOU LOVE TO SEE IT. pic.twitter.com/psTvun3xsr

Altuve already hit by a pitch? That’s a shame.