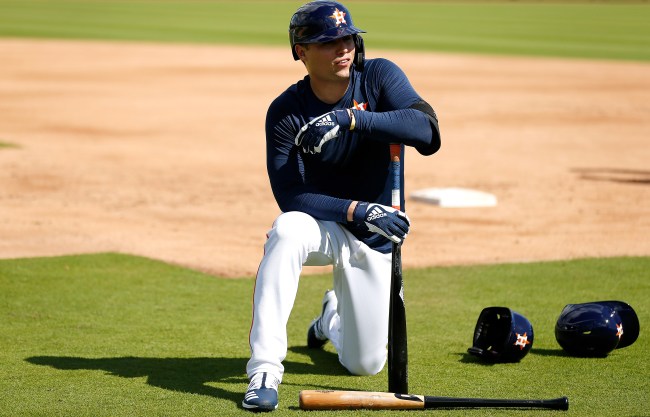 On Monday, your 2017 American League MVP* Jose Altuve was hit by a pitch in the Houston Astros’ first Spring Training game after being roundly heckled and booed by fans in attendance.

On Tuesday, unlike Altuve’s hit by pitch which appeared to be unintentional (key word: appeared), Astros shortstop Aledmys Diaz got drilled with a 97 mph fastball by Miami Marlins pitcher Jose Urena on the fourth pitch of the game and it certainly could have been construed as being on purpose.

Of note: Diaz wasn’t even on the Astros team that cheated its way to the 2017 World Series title. No one cares.

Astros slugger Alex Bregman, one would have to assume, approved of this move by Urena.

Prior to the game, during an on-field autograph session fans were heckling Jose Altuve calling for him to show them the “bad tattoo” he didn’t want the world to see after hitting a walkoff home run following Game 6 of the ALCS.

Earlier in the month, Carlos Correa said the second baseman didn’t take his jersey off after winning the 2019 ALCS because of a bad tattoo

Perhaps, and this is just a guess, but if Astros players like Carlos Correa and Josh Reddick would not be clapping back at fans and players for being angry at them for cheating their way to a World Series win, and stop taking away fans’ signs, then maybe they would be heckled a little bit less and have a few less pitches end up “high and tight” while they are batting.

For instance, when asked about the fans’ reaction to the Astros during their first game on Monday, Correa, who had already sounded off more than once about fans and players, responded, “What reaction? I didn’t hear anything.”

What did you think of the reaction?

Carlos Correa: “What reaction? I didn’t hear anything.”

I guess the fans will just have to get a little bit louder then, huh?

It’s going to be a very long season for the Houston Astros, and anyone related to them.