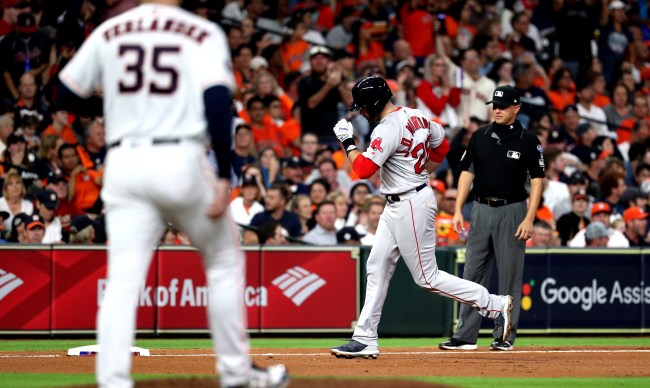 Boston Red Sox slugger J.D. Martinez was college teammates with Astros’ whistleblower Mike Fiers during their time Nova Southeastern University and are the two remain good friends to this day.

Martinez also played for the Houston Astros during his first three seasons in the Major Leagues, so naturally when Fiers blew the lid off the Astros’ cheating their way to the 2017 World Series title the friends spoke and Martinez expressed his support for his former teammate.

Now, with Martinez’s team, the Red Sox, soon to receive their punishment for their sign-stealing indiscretions (don’t expect it to amount to much), the Boston DH has also revealed to WEEI’s “Ordway, Merloni and Fauria” show that Fiers alerted him to the Astros’ cheating before the 2018 American League Championship Series.

“You can put me on any lie detector. You can put me on anything,” Martinez told the show. “Alex Cora never influenced us and never told us about that thing. The only way I ever found out was in the playoffs was when Fiers, who is a really good friend of mine, reached out to me and said, ‘Hey, make sure you’re doing this because this, because this is what these guys are doing in the playoffs.’ I was like, ‘What? How is this a thing?’ And then I mentioned it to (Cora) and he told kind of me about the whole system and everything like that. That was kind of why it was so crazy. (Cora) was so relaxed going into those playoff games because he knew and we were ready for it.”

Pitcher Ryan Buchter, who played the last two seasons alongside Fiers on the Oakland A’s, said Fiers told him privately that the Houston Astros began their illegal sign-stealing way back in 2014 and that it was still happening during the 2019 season, despite their and MLB commissioner Rob Manfred’s repeated refrain that the Astros “only” cheated in 2017, including during the postseason.