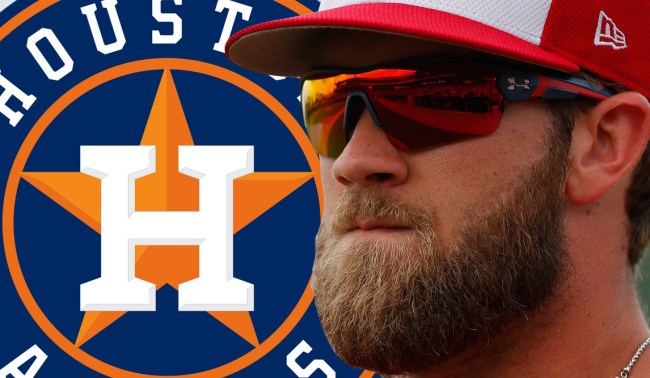 In news that Houston Astros fans probably really don’t want to hear, Astros GM Jeff Luhnow has officially confirmed that his team had a trade in place to acquire Bryce Harper at the trade deadline in 2018, but it was vetoed by the Washington Nationals’ ownership.

Rumors of potential trade was first reported by The Athletic back in November, but it was never publicly confirmed by anyone in the Astros’ organization. Until now.

Jeff Luhnow confirmed today the Astros had an agreement in principle to trade for Bryce Harper at last season’s trade deadline.

Brian T. Smith of the Houston Chronicle filed a report on Thursday that Astros general manager Jeff Luhnow had a deal in place to add Harper to their lineup for their playoff run.

“There was an agreement in principle in place and it didn’t get over the finish line for whatever reason, out of our control. But, yeah, we had interest,” Luhnow told the media. “We had worked out an agreement with players both ways.”

Jeff Luhnow acknowledged the #Astros had an agreement in place to land Bryce Harper in a trade last season that fell through: "It didn't happen. So we moved on." pic.twitter.com/r9ZXjasOVH

“Certainly a player like that would have helped us,” he continued.

And in news Washington Nationals fans probably don’t want to hear (unless Harper resigns with the team), back in November The Athletic’s Ken Rosenthal reported Washington would have received right-handed pitcher J.B. Bukauskas (the 76th-best prospect going into the 2018 season), possibly catcher Garrett Stubbs (.310/.382/.455 in Triple-A in 2017), and another pitching prospect

Then again, at the rate Bryce Harper and Manny Machado’s free agent negotations are going, neither of them may ever play professional baseball again.

When will he decide? pic.twitter.com/XeWpbuYynZ

The Giants are not announcing a Bryce Harper deal today, but shoutout to all the people on Twitter who thought he waited three months because he wanted to reveal his decision in front of a few hundred soaking wet strangers wearing Lincecum jerseys.

@Bharper3407 Come on home, Bryce. Your Nats fans are waiting…but the waiting is the hardest part! pic.twitter.com/zvL5NIXwOE