Astros’ Zack Greinke Gets Cocky And Tells A’s Ramon Laureano What Pitch He Was Going To Throw, Immediately Gives Up Three-Run Homer 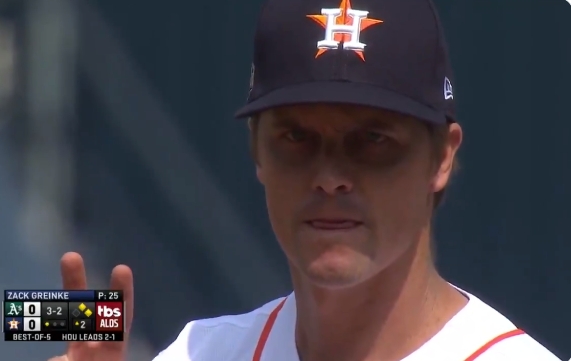 Houston Astros pitcher Zack Greinke thought it was a good idea to give away what pitch he was going to throw beforehand and it ended up costing him.

During today’s Astros-A’s ALDS game, Greinke let Ramon Laureano know that he was going to throw when he put up two fingers and Laureano immediately crushed the ball for a three-run homer.

The Astros used to steal signs, now they just give away their signs

Fans mocked Greinke after he gave up the home run.

Zack Greinke prides himself on being his very own self all the time no matter what anyone thinks.

But telling the hitter what's coming before allowing a 3-run homer?

Is that the opposite of the Babe calling his shot? https://t.co/YFOoH7B5pm

Update: Former pitcher Phil Hughes says that Greinke wasn’t giving away his pitch but was just communicating the catcher.

FFS Greinke isn’t telling the hitter what’s coming. It’s part of the sequence with his catcher