Joe Burrow’s High School Is Naming Its Football Stadium After Him, Which Is Pretty Cool For A 23-Year-Old 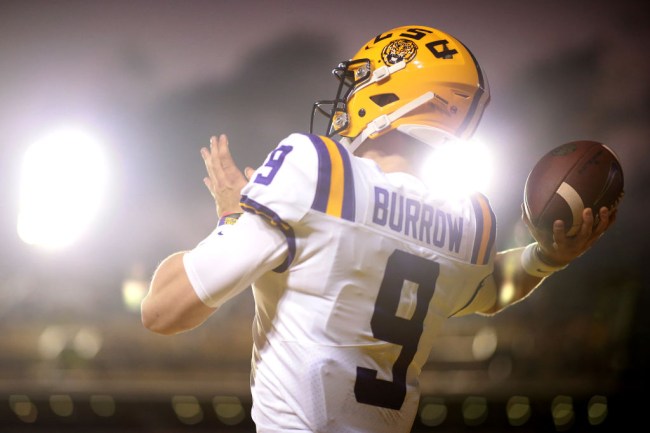 Joe Burrow has had a pretty solid past few months. He’s led LSU to its first unbeaten season since 2011, punched his team’s ticket into the College Football Playoff, and picked up a Heisman Trophy along the way.

Not so bad for a slightly overlooked 4-star quarterback out of Ohio that redshirted his freshman season and waited for a shot at Ohio State before transferring to LSU.

Well, it turns out Burrow’s still very young, but legendary story in the making is getting another awesome chapter added to it as his former high school is set to name its football stadium after him.

A ceremony to commemorate this occasion will be established after LSU season. Congrats to Joe and the entire Burrow family! #AthensBulldogs pic.twitter.com/wA0A61Ev1l

It’s not too often you see stadiums named after 23-year-olds, but with the season Burrow put together, it isn’t the craziest move ever seen. This sort of thing is usually reserved for players after they retire or have spent a few seasons in the NFL, but Athens High School isn’t wasting any time here.

Burrow did big, big things for the Bison during his high school days. He won the school its first-ever playoff games while throwing for over 11,400 yards and a whopping 157 touchdowns through the air.

As part of his impressive Heisman Trophy acceptance speech, Burrow talked about growing up in a very impoverished area of Athens, Ohio. Following the speech, $150,000 was raised to benefit the Athens County Food Pantry.

Playing your way to a Heisman Trophy, a shot to go win LSU its fourth national title, becoming the assumed first-overall pick in the NFL Draft and getting a stadium named after you is quite the year.