Joe Burrow Has Helped Raise Almost $150,000 For People In Need Thanks To His Moving Heisman Speech 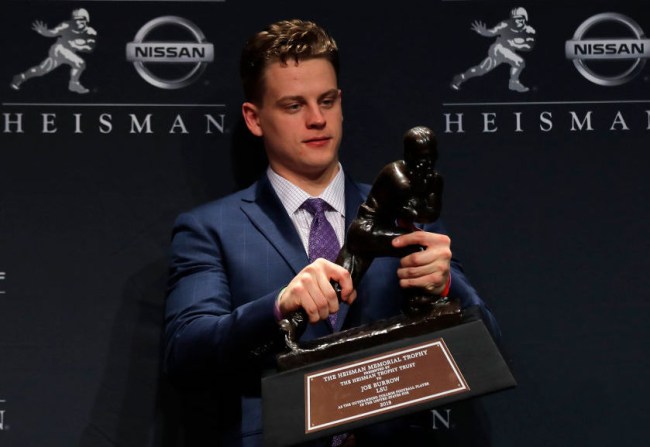 There was plenty of speculation concerning who was most likely to take home the Heisman Trophy ahead of this year’s college football season, and while Tua Tagovailoa was initially listed as the favorite, he faced some stiff competition in the form of Trevor Lawrence and his former teammate Jalen Hurts (among others).

However, there was one name that didn’t come up in most of these conversations: Joe Burrow, who had a pretty solid season in 2018 during his first year at LSU after transferring from Ohio State but didn’t appear to possess the kind of talent that would allow him to compete with the aforementioned names for the highest individual honor a college football player can receive.

As we all know by now, Burrow burst onto the scene in a big way en route to leading his top-ranked Tigers to the College Football Playoff and giving at least one person a very solid return on their gambling investment when he took home the award on Saturday after garnering 99.8% of the vote.

After learning he’d won, the quarterback took to the stage and delivered an incredibly emotional speech where he touched on a number of topics.

One of the topics in question was the area in which Burrow was raised and he made a point to encourage people there to use him as an inspiration for overcoming the adversity they face, saying:

“Coming from southeast Ohio it’s a very impoverished area and the poverty rate is almost two times the national average.

There’s so many people there that don’t have a lot and I’m up here for all those kids in Athens and Athens County that go home to not a lot of food on the table, hungry after school. You guys can be up here, too.”

It appears Burrow’s words struck a nerve with more than a few people, as it didn’t take long for fundraisers to start popping up to benefit those in need from the place he calls home—including one that has raised almost $150,000 (and counting) as of this writing to benefit the Athens County Food Pantry.

Well done, Joe (and everyone else who’s helped the cause).