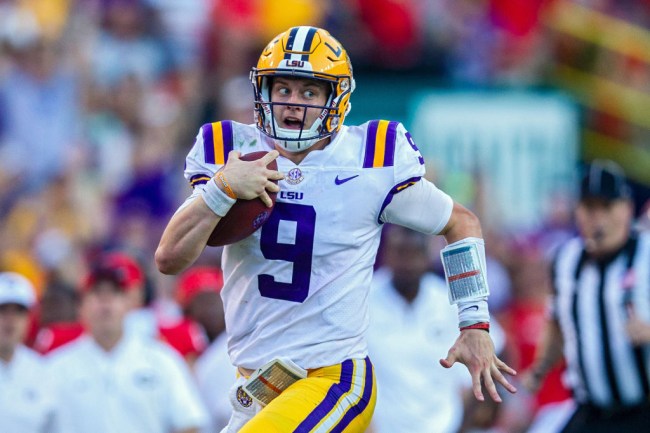 If you’re a gambling man, there’s a very good chance you’ve made some longshot wagers or bet on a double-digit parlay or two in the hopes of turning a minuscule amount of money into a comparative fortune.

After all, it’s hard to resist the temptation to do so when there are routinely stories about people who managed to turn a small amount of cash into a massive payday, whether we’re talking about the guy who converted $25 into a six-figure jackpot or the dude who got blackout drunk and made a $100 bet that netted him $26,000.

There’s also the guy who came one game away from transforming 89 cents into $500,000, but sadly, he made the fatal mistake on betting on the Redskins to win a game.

Now, according to Sports Illustrated, there’s a new gambler in town who’s making some waves in the form of Matt Porter thanks to a bet he placed last June after deciding to throw $50 on Joe Burrow to win this year’s Heisman Trophy.

At the time, the LSU quarterback was listed as a 200/1 underdog, which meant Porter was poised to pocket $10,000 (or $9,950 if you want to be a pedantic dick about it) if Burrow somehow managed to be the most dominant player this season.

Well, it’s safe to say Burrow has surpassed expectations and he’s currently the odds-on favorite ahead of Jalen Hurts and Tua Tagovailoa, the latter of who saw his Heisman chances plummet after it was announced he’ll be sidelined with an ankle injury.

Porter says the sportsbook he placed the bet with is attempting to get him to cash out, as they offered him more than $3,800 earlier this week to hand in his ticket prematurely. However, he’s made the decision to ride it out (at least for the time being) and doesn’t seem to have any interest in hedging based on his discussion with SI.

Bold strategy, Cotton. Let’s see if it pays off for him.