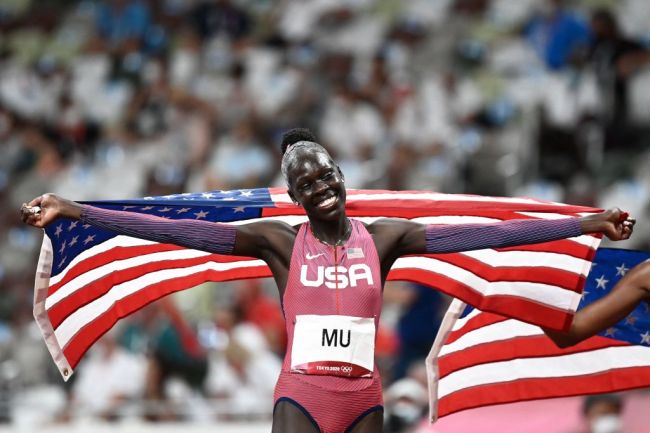 Teenagers are not supposed to show up for their freshman year of college, win two NCAA titles and go on to win an Olympic final. But Athing Mu doesn’t care what is “supposed” to happen.

The 19-year-old from Trenton, New Jersey closed out one of the greatest seasons ever by an American middle-distance runner on Tuesday and has the gold medal to show for it. She won the 800-meter in Tokyo with an American record of 1:55.21 and made history.

An American woman had not won the event in 53 (!!) years, dating back to the 1968 Games in Mexico City. That changed in definitive fashion as Mu led wire-to-wire and crossed the line nearly six-tenths ahead of the second place finisher.

She is the first American woman to win the 800m since the 1968 Mexico City Games. #TokyoOlympics pic.twitter.com/WmJq2dYulr

Her family went bonkers back home in the Garden State.

Despite her age and relative inexperience on the international level, Mu entered the race as the favorite in Japan. She absolutely dominated the field at the U.S. Olympic Trials.

Years in the making.

This has been a longtime coming for Mu, an American track prodigy.

At just 16 years old, she broke the American indoor record in the 600-meter. Since then, she has continuously broken records in multiple events.

In just this season alone, the Texas A&M Aggie broke six collegiate records in the both the indoor and outdoor 600-meter, 800-meter and 4×400-meter relay. She’s dominant.

After winning a gold medal in her Olympic debut, Mu coined the term ‘Medal Mentality.’ The spin on ‘Mamba Mentality’ is what pushed her through to becoming an Olympic champion.

“I came here wanting a medal.”

She got one— the top one.