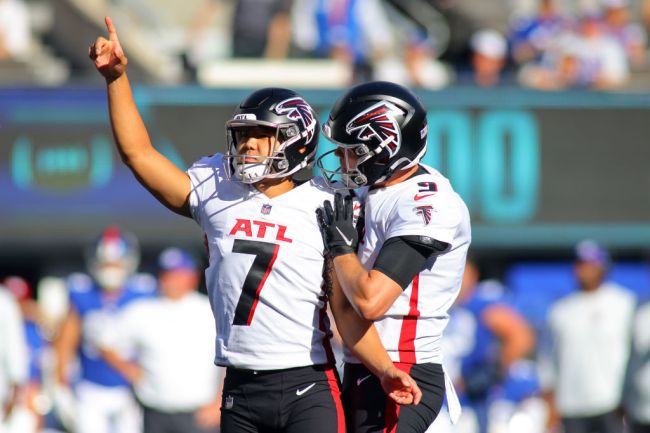 Falcons kicker Younghoe Koo went 2-for-2 on field goal attempts and 3-for-3 on extra points on Sunday. Atlanta, facing the New York Jets in the first London game of 2021, held on to an early lead and won the game 27-20.

Koo’s kicking game was a big part of the victory, but he had to warm up in unusual fashion

At some point during the team’s trip across the pond, the Falcons forgot Koo’s kicking net. When the staff got to Tottenham Hotspur Stadium on a lovely Sunday evening in England, they had to scramble for a solution.

To get Koo a net, Atlanta turned to the most British solution possible— a soccer goal. With a little bit of English ingenuity, a net and a couple of ladders, Koo had himself something to kick into.

The team assembled the net over two stepladders and held it down with some weights that were borrowed from Totenham. Here is how it look:

Appears the Falcons forgot their kicking net and so have improvised one using two step ladders and a goal net. pic.twitter.com/bAxITEA88W

Looks like the Falcons equipment manager forgot the kicking nets!

British ingenuity at work: It appears the Falcons don’t have their sideline kicking net. NO PROBLEM. pic.twitter.com/lawY6Xph2r

it wasn’t pretty, but the makeshift meshwork worked just fine, based on Koo’s 5-for-5 day and the win. As Ted Laso would say, “I think that’s what it’s all about. Embracing change.”

Koo certainly embraced the change that was presented to him. What an incredibly British twist!