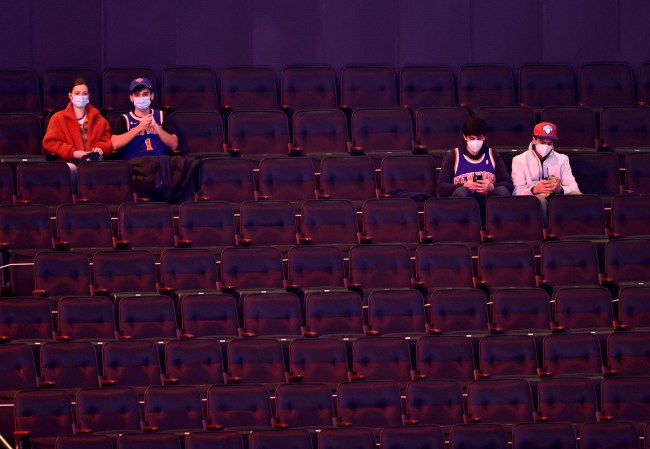 There’s a brilliant stand-up bit where the comedian (who’s name is escaping me) jokes that the worst thing you can do to Star Wars nerds is confuse their passion, using the example of driving by them and yelling out the window: “Star Trek sucks!”

Hate never stings as much as indifference because hate requires energy a knowledge of one’s point of view, whereas blind apathy is far more trivializing, especially regarding something you’d die for.

Following another soul-draining, heart-breaking, spirit-crushing Knicks underachievement campaign, the Atlanta Hawks Star Trekked on Knicks fans’ Star Wars—trolling them with the implication that they’ve Drake’d their way into Nets fans, a team Knicks fans pride themselves on treating like New York’s Ringo Starr.

So what if Manhattaners can hop on the Q train for 15 minutes and witness a team with three of the league’s biggest superstars that has achieved the unthinkable in winning a playoff series. A team that doesn’t have an owner who cares less about fielding a team the city deserves than his country blues band’s next gig at Cracker Barrel.

Misery is a drug, and it’s going to take more than a superteam, cool urban uniforms, and a Jay-Z minority ownership to break the addiction.

Knicks fans cannot be more clear about this. Here are some of the tweets written in response, and through tears.

???????? This meme makes no sense, we would literally root for you guys to beat Brooklyn if it came down to that lmfao

I know zero Nets fans. New York is ride or die Knicks. Congrats on the win but this tweet is an L

When hell freezes over💯 https://t.co/AfpOwceBni

I think this is more accurate pic.twitter.com/iFalEZ5Boz

This is a terrible post. Knicks fans deserve more respect. The last 8 years have been hell why would we switch teams after we finally made the playoffs?

This is really stupid, not a single Knicks fan would ever root for the Nets lmfao. If the hawks play them go hawks 😂😂😂 fuck Brooklyn https://t.co/Ppxp0bhAyB

Wtf is this? I rather root for @ATLHawks than root for Brooklyn. This is trash. https://t.co/QWZfM12O0y

Idiots. New York Knicks fans are one of the most loyal and dedicated fanbases in the NBA. Hardly any Brooklyn Nets fans, except for a woman 👩 who works for ESPN. Philadelphia Sixers in 5 games. https://t.co/zn4kdX4toL

Knicks fans would NEVER root for Nets. They’d actually root for Hawks before the Nets.. this is an L https://t.co/nxAiREbvoz

It’s only a matter of time. We all have a breaking point.

This @nyknicks fan JUST TOOK OFF HIS KNICKS JERSEY at a @BrooklynNets game. NYC turning into a Brooklyn Nets town. #itshappening #NetsWorld pic.twitter.com/znT4adbptB

Now we can watch the Sixers steamroll the Hawks and all this hoopla will be erroneous in two weeks. Ah, the internet.