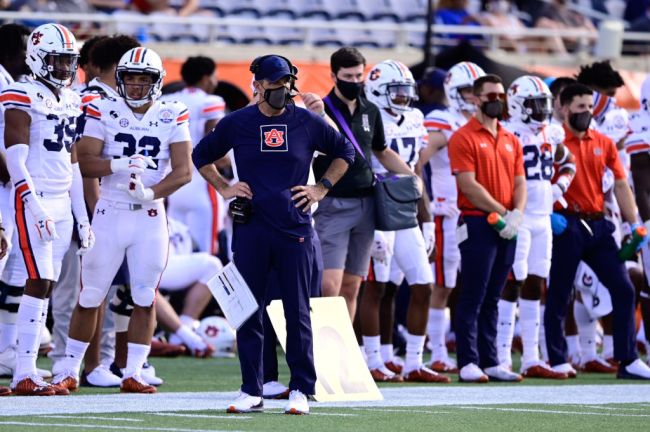 Auburn head football coach Bryan Harsin wants his players to earn everything. That even includes getting to where they are going.

According to AL.com’s Tom Green, the 44-year-old has put a sign on his elevator that stops healthy players from getting on board, hitting a button and going up (or down). The elevator, for the Tigers football program, is for injured players only.

Harsin is leaning into blue collar mentality. He wants to instill that driving factor in his players that allows them to wake up early and work long hours without a trophy or a “pat on the back.”

Apparently Bryan Harsin installed a sign in the elevator of the athletics complex saying it's for injured players only; everyone else has to take the stairs.

He wants that "blue collar mentality" on his team, estimates he climbs the stairs ~18 times a day https://t.co/zbWeGIxApE

Prior to his transition to the SEC, Harsin had a great career at Boise State. The Broncos went 69-19 during his seven seasons and failed to make a bowl game only once during last year’s COVID-impacted season.

Clearly, based on his time in the Mountain West, Harsin’s hard-nosed, no-stairs approach to football is a winning formula. The question is whether it can translate to the best conference in football.

The reactions to the news of an injured-only elevator in Alabama would believe that it is not a necessary or winning tactic.

And here I thought the key to beating Alabama was getting good players. https://t.co/bEW7E4AO6V

Rival teams recruiting vs Auburn “you can take the elevator here”

when the team goes to the zoo they can only see the tiger exhibit. no elephants

This seems like one of those things that coaches do that players follow cause they have to but really doesn’t change their mentality on or off the field.

Auburn opens its season against Akron on Sept. 4. Can the players take the elevator on game day?