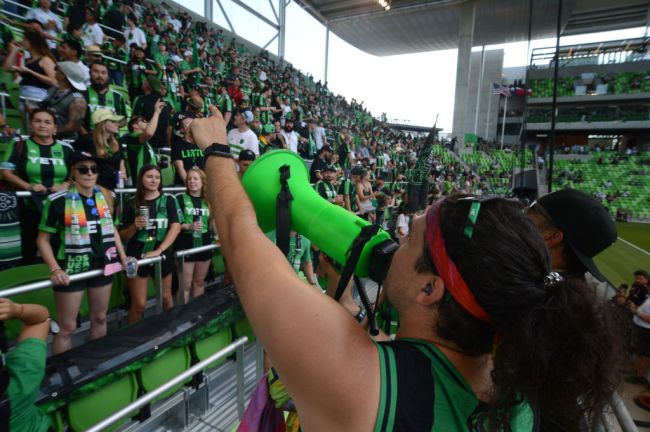 Austin FC opened its brand-new, $260 million stadium on June 19th. Matthew McConaughey was in the house to lead the club’s supporters with his bongo drum and the stands were packed. However, the game ended in a 0-0 draw and then the team went on the road.

After losing to Minnesota United, Austin FC returned home and drew 0-0 with Columbus. The first-year MLS club had not scored in its first two games at home, but that all changed in game three on Friday.

Can’t get over how incredible that atmosphere was tonight. @AustinFC fans are legit. The green light when they score is gonna be iconic. Just think if every MLS stadium felt like Austin, KC, Seattle, etc. pic.twitter.com/Iymfxfm4TY

In front of a 20,500 full-capacity crowd, Jon Gallagher found the net in the 28th minute and scored the first goal in Q2 Stadium history.

It was pandemonium in the seats.

The scoring barrage was nowhere near over. Five minutes later, before the chaos had even died down, Diego Fagundez scored again and blew the roof off of the stadium.

What a start for @AustinFC 👏👏 pic.twitter.com/nSTHTuFqok

Portland got one back just before the half, but it wouldn’t matter. Austin FC scored two more in the second half. Alex Ring finished a tremendous header in the box and, once again, the supporters exploded. Ring ran over to the fans and celebrated the strike with them.

The aftermath of goal #3 at the first home win for @AustinFC ¡Listos! pic.twitter.com/wS3RJak4RI

Austin FC was not done there. To ice the cake, Hector Jimenez added a fourth. The crowd could not contain themselves and went equally, if not more wild on No. 4 than they did No. 1.

It's a party in Austin 🎉 pic.twitter.com/kY567SysaJ

.@AustinFC fans are the best! pic.twitter.com/ajRQk9Y31T

For a “Longhorn city” where they said that soccer would never work, the scenes were impeccable and McConaughey, the team’s Minister of Culture and part owner, was pumped.