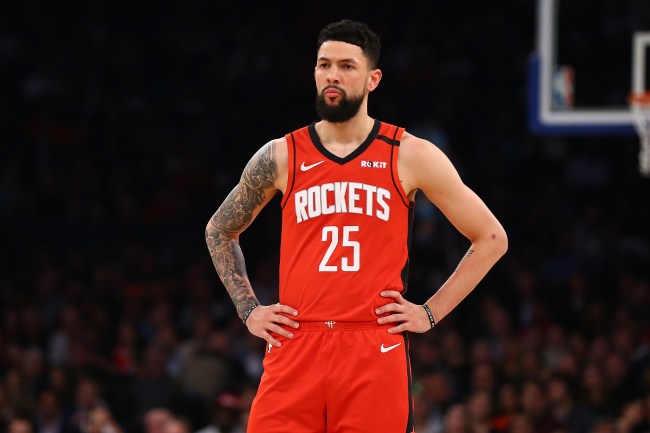 Austin Rivers and his Houston Rockets have a very good chance at winning this year’s NBA title — with a champion planning on being named by October at some point once the league finishes its abbreviated season. Given the fact that this season has been so wild because of the ongoing pandemic, there’s a lot of talk about if the team that wins the championship should be recognized with an asterisk next to it since it didn’t come in a normal year with 82 games plus the playoffs.

That’s a debate that Golden State Warriors head coach Steve Kerr recently tackled, saying he thought the champ absolutely should not have an asterisk because of the strange circumstances. As for Austin Rivers, well, he disagrees, saying that the soon-to-come champions should have an asterisk; but not the kind you might expect.

While talking to Taylor Rooks of Bleacher Report, Rivers offered up a solid reason as to why the team that hoists the Larry O’Brien Trophy this year should be recognized as having an even more difficult path to a title than in previous years. Take a look below at the guard’s thoughts.

“I think whoever wins should (an) asterisk next (to) it. But only for it being one of the toughest championships ever won,” he responded. “(You’re) asking guys to take 3-4 months off, then come back and find chemistry etc. then play during a pandemic, while players are fighting for the BLM.”

I talked to Austin Rivers about whether or not this NBA Champion will have an asterisk next to their name. This was his response: pic.twitter.com/Pn1EuVLP7p

It’s an absolutely interesting take from Austin Rivers, and one that should probably be considered when recognizing this year’s NBA champ. In the future annals of NBA history, fans should remember the 2019-20 season as one that has never been conquered before, and, if that means drawing attention to the championship team in a positive way like this, then we should all be for it.